Heart Of The Alliance 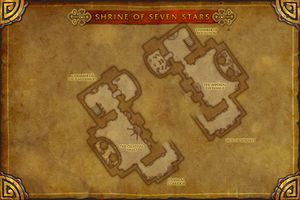 I can't believe this has happened, <name>. After all we have been through here on Pandaria, will our people never learn from their past mistakes?

Brann's expedition returned recently from Mogujia, bearing a sample of sha for study.

I had my reservations about this endeavor in the first place, and my worst fears have been realized.

The sha has escaped containment. I do not need to explain the horror of bringing the sha into the heart of the Vale.

We must dispel any sha we can find, and quickly!

We must protect this land, and our people, from the sha's influence.

I see that you and my son have been hard at work. Thank you for taking the initiative to aid our cause here in the Vale. 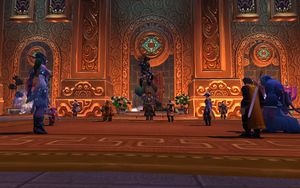 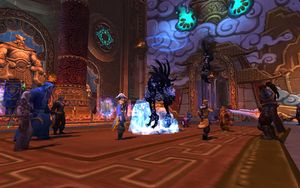 Anduin Wrynn says: Be ready for anything, <name>. We may have to use force against our own men.

Look around for sha-touched footmen and interact with them. They will turn hostile. Watch out for their Devastation ability! Defeat six, then return to King Varian as Anduin teleports away:

Anduin Wrynn says: I knew you were the right one for this task, <class>. Meet me back upstairs when you are finished here.

On entering the Imperial Exchange:

King Varian Wrynn says: I see. So it was this... sha... that caused such violent behavior in our troops?
Anduin Wrynn says: Yes, father. I encountered sha energy in my travels. At its full power it is terrible to behold.
King Varian says: We Alliance have rallied to defeat many enemies, my son. The sha will fall to us, just like any other.
Anduin Wrynn says: This isn't the same, father. The sha cannot simply be defeated. It feeds on our inner-most weaknesses. It twists our thoughts. Don't underestimate it!
An Echo of Hatred forms from the Sha-touched Claw.
Brann Bronzebeard says: Yer Majesty! Look!
Jaina immediately casts

[Frost Nova] to freeze it in place.
Genn Greymane says: By the light, is that a sha?
Anduin Wrynn says: Yes. Don't go near it!
Tyrande Whisperwind says: I sense great darkness emanating from this... thing. Destroy it, now!
Farseer Nobundo says: I agree. Only suffering can come of such a creature.
Sky Admiral Rogers says: Your Highness, we should study it. Weaponize it! The Horde already outnumber us here on Pandaria. We need to gain every possible advantage.
Brann Bronzebeard says: It couldn't hurt to study it. 'Tho I don't much care for the way it's lookin' at me.
Tinkmaster Overspark says: Yes, yes! Very interesting! Perhaps I could distill it into a new power source?
Sky Admiral Rogers says: Garrosh is using every weapon he can lay his hands on. Shouldn't we level the playing field?
King Varian Wrynn says: What do you think, Anduin?
Anduin Wrynn says: Garrosh's example is not one that I care to follow. The Alliance should make its own decisions. The RIGHT decisions.
Anduin Wrynn says: It is true, it may be possible to someday harness the sha into a weapon. But we risk destroying our own people in the process. That is not a price I am willing to pay.
King Varian Wrynn says: Well said, my son.
King Varian Wrynn says: This power is too dangerous. I will have none of it!
Varian destroys it with a mighty strike from Shalamayne.
Anduin Wrynn says: <Name>, thank you for helping me today. I knew we could convince my father of the right course. Please, go back to your other duties for now.