Heart of the Empire 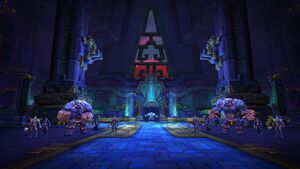 The Heart of the Empire.

The Heart of the Empire is a throne room located on the higher reaches of Dazar'alor, right beneath the Great Seal. A large decorated gate leads to the stairs of the pyramid in the outside, and two smaller doorways behind the throne lead to a balcony overlooking the whole Port of Zandalar. Here King Rastakhan fought and fell against the Alliance invaders during the Battle of Dazar'alor.

Being another throne room, this one is probably used for official acts, as the Golden Throne is found slightly far, on the top of the pyramid.