Heart of the Nightwing 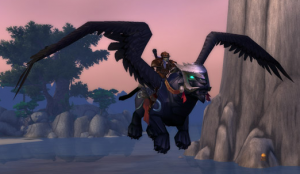 The Obsidian Nightwing with a passenger

Heart of the Nightwing was originally the third special mount that players can earn only through the Recruit-A-Friend program. It first became available to players claiming their RAF reward after July 16, 2012. Obtaining this mount grants the Feat of Strength achievement

[Friends In Places Higher Yet].

In patch 5.4.1, the Recruit-A-Friend program was updated to include a choice of one mount from all current and previous Recruit-A-Friend mounts, or one companion from event-only promotions.

The mount is mailed in-game to the character you select from Master Handler Sylvester. With the item is a unique letter written up as a shipping manifest:

Heart of the Nightwing

Grasped tightly and clutched to one's breast, this enchanted heart of volcanic glass can transform the bearer into an Obsidian Nightwing.