Hearthsinger Forresten is a level 57 elite rare ghost traveling singer and piccolo player located in Stratholme, in between the Live and Undead sides. He is a wandering minstrel ghost, who not only drops the [Magister's Boots], but also a [Piccolo of the Flaming Fire] trinket which causes folks to dance when you play its song. He is infamous for his oddly colored and flamboyant-sounding gear, such as the [Rainbow Girdle]. He was a traveling performer, back when the city was alive and booming and was caught in the wrong place at the wrong time.

The Culling of Stratholme claimed the lives of innumerable people whose only crime was being in the doomed city. A traveling singer and piccolo player named Forresten was one such victim. He continues to wander the city in death, unable to accept his tragic fate. 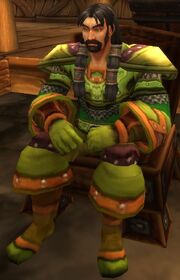 Forresten in Culling of Stratholme.

Hearthsinger Forresten can be found alive in Old Stratholme, located inside an inn on the outskirts of Stratholme. Two other Stratholme mini-bosses can also be found there: Postmaster Malown and Fras Siabi.