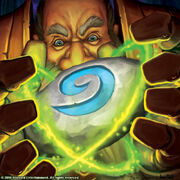 A hearthstone in the TCG.

A hearthstone is an enchanted stone that can teleport the wielder to the location it is bound to, such as an inn. All characters receive a Hearthstone upon creation that returns them to their starting area. Asking an innkeeper to "make this inn your home" will set that as your new home location. Should the player destroy their hearthstone, they can recreate one by simply speaking to an innkeeper.

Hearthstones are very rare objects. King Varian believed them to be only a legend, calling them "things heard only in stories concerning magi... or elves." A hearthstone owned by the night elf ambassador to Stormwind was coveted by Tyrande Whisperwind, Broll Bearmantle, and Thura. They intended to use it to return to Darnassus when Stormwind was attacked by the Emerald Nightmare. In the end, the group was ambushed and only Broll made it back.[1]

Jaina Proudmoore gave Anduin Wrynn a hearthstone she had arranged to be created for him, bound to Jaina's tower in Theramore so that he could get away whenever his father was in one of his "Lo'Gosh moods". Jaina stated that such an object was rather rare. She explained that it would bring Anduin straight to her hearth and that the rune on the stone means "home". They also have runes that refer to the location they are set to - in this case, Jaina's name. Anduin assumed that it was purely magical, which Jaina confirmed. As it was apparently bound to her, she instructed him to hold it tightly in his hand and focus, to "take the stone into himself" and make it his. As she placed her hand over his, a faint blue light lined both their hands. Anduin concentrated, and Jaina could feel the binding of the stone shift from her to him.[2] The prince later used the hearthstone to escape Ironforge when it fell under the control of the Dark Iron clan.[3] Years later, Anduin attuned the stone to Stormwind instead. At one point after the Argus Campaign, he used it to quietly return to Stormwind after a visit to Darnassus.[4] During the War of the Thorns, he gave the hearthstone to Tyrande Whisperwind, allowing her to save her husband Malfurion from Darkshore and transport him to Stormwind.[5][6]

Both the Alliance and Horde have lent hearthstones to adventurers to allow speedy relocation to areas in need of help.[7][8] One such adventurer found in Tanaan Jungle wrote in his journal about how he planned to kill ravagers and stockpile their hides before hearthing back to Ashran.[9]

The paladin Gidwin Goldbraids lent an adventurer [his hearthstone] so that they could return to Light's Hope Chapel.[10]

[Vol'jin's Hearthstone] was bound to The Den in Durotar. After barely surviving Garrosh Hellscream's assassination attempt, Vol'jin gave the hearthstone to an adventurer so that they could go seek Thrall for help.

According to legend, Bryher Stonekeeper ran a prosperous tavern near Loch Modan. His daughter, Keelin, traveled far from home, eventually developing the kind of reputation that embarrassed her father. Bryher made a deal with a gnome warlock to keep his daughter close to home. The warlock turned Keelin into a hearthstone, so that she would always return to the inn. The small stone found through archeology resembled a hearthstone. It was warm to the touch and made very faint giggling noises at inopportune moments, which may confirm the story.[11]

[Hearthsteed], a mount rumored to be chiseled from the same rare mineral as hearthstone themselves, bears a striking resemblance to every adventurer's most useful item. A construct of exquisite craftsmanship awash in a mystical blue glow, its rocky exterior just barely manages to contain the power that lurks within.[12] 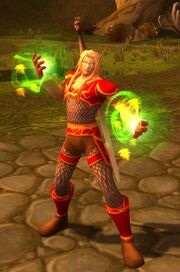 A player's hearthstone is a key adventuring item in the game. Upon moving to a new area or reaching a new continent's capital city, players will often want to bind their hearthstone to the local inn to allow efficient travel back to the area. Among the most common times to use it are:

Several items in the game have an effect similar to that of a hearthstone. The following ones share a cooldown with a regular hearthstone, essentially acting as a cosmetic change to the typical tool:

Abilities that behave similarly to hearthstones without sharing a cooldown also exist, but are much rarer or more restricted:

It is possible to bind the hearthstone to a capital/hub city with many permanent portals, allowing access to many different continents through a single hearthstone location. During expansions in which the hub cities are not Orgrimmar and Stormwind, low-level characters can reach that city with the help of a friendly mage's portal spell, and they can use their hearthstones to return to the city later, then take a portal to a desired destination. This is sometimes done for alts for accessibility to cities far away from each other. However, since the hearthstone is committed to that one location, it becomes less useful and flexible for the smaller-scale movement an alt might be doing while questing.

While leveling, players usually set their hearthstones either to a major city close to their questing zone, or individual inn locations where the quests revolve around. The capital allows for quick shifts in focus such as pausing questing to partake in holiday events or meeting with other players, while local locations allow hearthstones to be used "tactically" for short trips within a questing zone. Such hearthstones can still ease travel on the return trip from a capital city, of course.

For max level characters, those with fast flying mounts, or others not focused on questing and short-distance movement, ease of travel throughout the world is the priority. During most expansions, there is typically one "hub" city with many permanent portals to various continents, so players will want to bind their hearthstone in that hub, unless they have some other tool to get there such as the

[Dalaran Hearthstone]. See Portal (city) for a list of past and present portal connections out of hub cities.

Level to level, if a player wishes to bind their hearthstone to a central location rather than local quest hubs, these locations often serve well:

During the World of Warcraft alpha, hearthstone functionally was made available by a spell called "Word of Recall".[13]

Until patch 3.1.0, it was possible to "trick" the game into teleporting characters to their hearthstone point while it was on cooldown. A player would create a group with someone else, zone into an easily accessible instance (such as the Stockade), then pass the group lead to the other person and leave the group. The system would then teleport them to their hearthstone point as an invalid group member. This technique was known as "ghetto hearthing". Post-patch, the game transports such characters to the nearest graveyard instead of to the hearthstone location. At this time, the cooldown of a hearthstone was also lowered to 30 minutes, reducing the motivation for such tricks.[14]

In other Blizzard games

The digital card game Hearthstone is named after the famous stone. The game itself takes place in an inn and is narrated by the innkeeper who welcomes back returning players upon logging in. The trademark Hearthstone swirl also serves as the game's logo.

Hearthstones can also be found in the team brawler Heroes of the Storm, where it serves a similar purpose to that in World of Warcraft, to teleport the player back to the Hall of Storms.