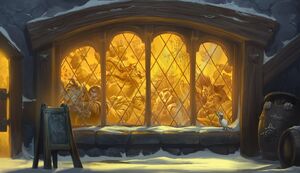 A tavern brawl in the inn. 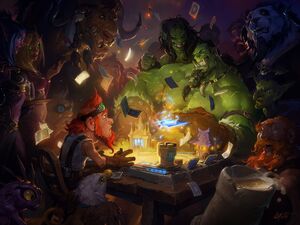 A gnome and an orc playing a game of Hearthstone in the inn.

An inn (or tavern) is the main setting of the Hearthstone online card game. It is owned by the dwarven innkeeper Harth Stonebrew, who is commonly referred to simply as "the Innkeeper".

Although the game of Hearthstone quickly rose to popularity and was played all across both Azeroth and Draenor, it began in the inns, and there is one inn, the one where it truly began, that rises above the rest.

The Inn is not easy to find, and most visitors can't tell you how they got there. A squad of orcs will say they stumbled in off the streets of Orgrimmar during an unseasonable storm, and a caravan of gnome traders might claim they slogged through the Swamp of Sorrows for days before finding the inn in the middle of nowhere. There is one constant: all patrons of the Inn found it when they needed it most, when they couldn't bring themselves to take another step.

The Inn gets rowdy from time to time, but as long as the visitors stick to their fists it's fine. The Innkeeper is stronger than he looks, and as soon as anyone pulls out their blade or magic, they'll probably find themselves flying out of the front door, and, if they're very lucky, end up on a street in a city they recognized.

Many who leave the Inn do so with a Hearthstone board tucked under their arm, since most people have trouble finding the Inn more than twice a year.[1]

The Inn is the kind of place that will always welcome anyone and everyone who's willing to play fair and have fun, so it tends to get all sorts of visitors, but some crowds leave more of an impression than the others. During the Grand Tournament, most of the visitors were wearing "the shiniest armor you ever saw", including the magic-using types. The Innkeeper claims to have even seen murlocs geared up in plate, and a young dwarven woman leading a majestic unicorn around the common room.

Of course, the Inn has a knack for putting itself right where the excitement is.[2]