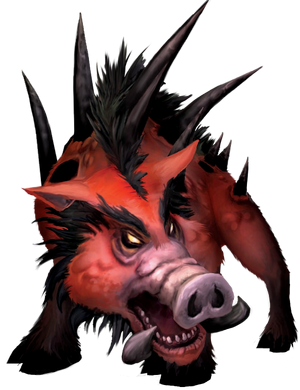 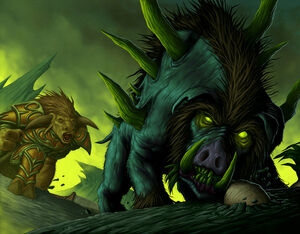 A felboar in the TCG.

Veterans of the battle for Outland's Hellfire Peninsula are traumatized by thoughts of these beasts to this day.[1]

Helboars, also known as felboars and demonic boars, are spiny, mottled boars that burn with different coloured flames. It comes in a variety of looks, possibly related to the amount of exposure it has had to the demonic energies of the Twisting Nether. Helboar were once ordinary boars, now mutated by demonic influence.[2] In Azeroth, the helboar is native only to the Blasted Lands. The Draenor variety found on Hellfire Peninsula show far larger signs of demonic blood. Their hides are brightly colored and twisted into a vile parody of a boar.

Boars are a family of Tenacity pets and are tamable by hunters.

Helboar are spiny, mottled boars that burn with a reddish-orange flame. Helboar were once ordinary boars, now mutated by the earth-shattering magic of the Blasted Lands. The arcane fire that savaged the region was absorbed into native boars, turning them into savage, ferocious predators. The body of a helboar is constantly aflame, although this flame deals no damage to the creature. Helboar are omnivores, but consume only plants or animals thoroughly cooked by their flames. Typical helboar are 4 feet long, stand 3 feet high, and weigh 300 pounds or more. Helboar viciously charge any creature that enters their territory. Once engaged in melee, they use their flaming gore attack to tear into and fry their opponents.[4]