Not to be confused with Felcular.

Helcular is a Forsaken necromancer located at the Ruins of Southshore.

Helcular can also be found accompanied by Kel'Thuzad, patrolling the road to and from Southshore in the Old Hillsbrad Foothills, accessed via the Caverns of Time. Prior to the shattering, he was deceased, but could be resurrected as Helcular's Remains, a level 44 elite undead, as part of the Helcular's Revenge quest chain. If attacked by Alliance he summons skeletons to attack them.

Helcular was a mage living in the Hillsbrad Foothills, presumably having some affiliation with Kel'Thuzad's Cult of the Damned (and later, possibly, the Scourge, as his appearance in Old Hillsbrad predates the debut of the Scourge plague). Helcular was preparing to transform himself into a lich when a human lynch mob from Southshore found the cave where he was performing the ritual, and subsequently murdered him. He was buried in the Southshore graveyard.

One of Helcular's apprentices, Novice Thaivand, resides at the town of Tarren Mill. Now a member of the Forsaken, he directed members of the Horde to find

[Helcular's Rod] and begin the process of resurrecting him, so the dead mage could have his revenge on the people of Southshore.

Following his resurrection, and having survived his onslaught against Southshore, Helcular has decided to join to the Forsaken just as his apprentice did years before. Helcular now seeks to remove the worgen threat from the Banshee Queen's sphere of influence, and expresses the belief that his new opponent Ivar Bloodfang should have been killed in Silverpine. He seems to be eager to find a method by which to remove the worgen's immunity to the curse of undeath. 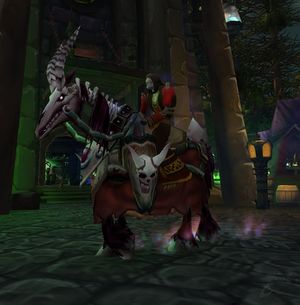 During the Legion Invasions of Hillsbrad, Helcular led the forces of Azeroth in defending it, apparently having learned more powerful shadow magic as he used a variety of spells against demons in Tarren Mill. He was also mounted on a skeletal steed. He claimed that by defending Hillsbrad, the forces have successfully defended all of Lordaeron from invasion, but that the fight with the Legion is far from over.

In time, we will rebuild this place and restore it to its former glory - minus all of the annoying humans.

At some point during their patrol in Old Hillsbrad, Kel'Thuzad and Helcular stop and begin conversing... a conversation that seems to indicate that Kel'Thuzad taught him the art of necromancy:

If the pair encounter the Captured Critter that has been killed by the children Sally Whitemane and Renault Mograine then Kel'Thuzad continues.