Helheim (also called Hel)[1] is the desolate realm of the Val'kyr Helya. Here, the spirits of the dishonorable spend eternity in an endless futile battle, always seeking glory but never able to attain it.[2] This land is connected to Haustvald[3] and Tideskorn Harbor.

For his misdeeds, Bryndaor was cursed to guard the gates of Helheim for eternity.[4]

After the corrupted keeper Loken had restored Helya's free will, she called upon the same powers she had used to secure the Elemental Plane and sealed off Odyn's fortress — the Halls of Valor — with an impregnable, magical barrier. She then proceeded to create Helheim as an enchanted refuge for herself and the other Val'kyr far below the Halls, and bound it to Azeroth's great seas. Ocean mists soon enveloped her new home and shrouded it from sight, and the realm became the final destination for many vrykul spirits after death.

However, the darkness that had long festered in Helya's heart transformed Helheim into a place of nightmare and shadow, and the vrykul souls who arrived in the realm were soon transformed into the wraithlike kvaldir.[5]

Helheim is the polar opposite to the Halls of Valor: while the greatest vrykul warriors are brought to the Halls, the unworthy were pulled into Helheim upon their death. The kvaldir also raided the coastlines and brought souls here before they could be judged, thus robbing Odyn of potential champions for his Valarjar.[6] Upon learning that Helya had started stealing Valarjar souls, he started the Trial of Valor to test the might of powerful champions which he would send to finish Helya once and for all. 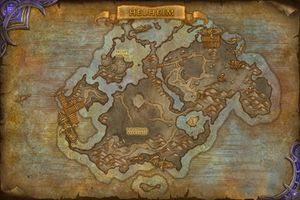 Helheim's exact location is unknown, but since she created it like the Elemental Plane, is thus inside a pocket dimension. Chronicle stated that Helya created it "below the Halls of Valor", then it was bound to Azeroth's oceans. It is possible it is inside the Abyssal Maw, given Helya's involvement in the creation of the Elemental Plane and the fact water elementals serve her in Helheim.[8]