Hellfire Citadel is a raid instance introduced in patch 6.2.0, and the final one of Warlords of Draenor.[1] It features 13 bosses, with Archimonde being the last one. It is the stronghold of the Iron Horde, now corrupted by Gul'dan and the Burning Legion. 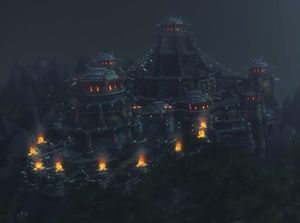 The Citadel before its corruption.

Hellfire Citadel was also once known as the Iron Citadel,[2] the seat of power for the Iron Horde and its vast armies. However, during a display of power by Gul'dan to Grommash Hellscream, Gul'dan corrupted Tanaan Jungle by unleashing the Felblight, and impaled the highest tower of the citadel with massive stone pillars. Gul'dan then began to use the Citadel as the capital of his Shadow Council and the now corrupted remnants of the Iron Horde, as well as the Burning Legion on Draenor. The forces of the Legion were supported by the Sargerei draenei and Sethekk arakkoa.

Not long after its corruption, Hellfire Citadel was attacked by invading Alliance and Horde forces. The invaders advanced into the citadel, defeating most of its inhabitants, including Archimonde. The fortress's current status is unknown.

When Garrosh encouraged Grommash to begin construction of this massive stronghold at the heart of Tanaan Jungle, to serve as a staging ground for the assault of Azeroth, he even suggested the name Hellfire, pulled from a different time and a different land. He dreamed of seeing mighty orcish iron towering over an unblighted landscape, so very different from the wasteland he had known in Outland. But even as times change, so too do they stay the same.

Before the gates of Hellfire Citadel, fel-infused siege engines and monstrous beasts stand ready for an assault on Azeroth.

Kilrogg was the first to accept Gul'dan's twisted offer, but many orcs followed. Bloodthirsty and savage, they await in these halls.

With Gul'dan's ascent to power, the Sargerei and other members of the Shadow Council now work openly in service of the Legion.

Atop the spires of the Citadel, demonic champions ready themselves, as Gul'dan begins a dark ritual...

On the grounds of the ruined Dark Portal, Archimonde himself comes forth to ensure that the Legion's plans do not fail.

The quickest way to get there is by taking the portal to Lion's Watch/Vol'mar located in Stormshield/Warspear at Ashran. The portal only exists once the player has completed the introductory quests for Tanaan Jungle. 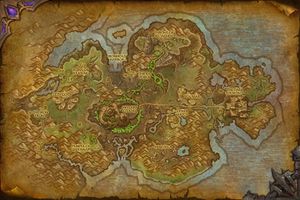