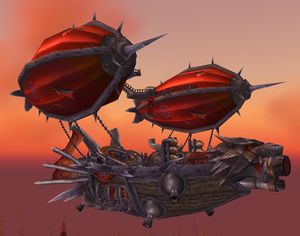 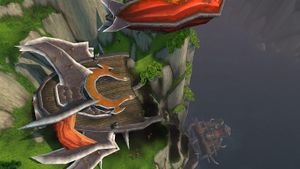 The wreckage of Hellscream's Fist in the Jade Forest.

Hellscream's Fist is the Horde gunship that the adventurer first travels to Pandaria with during its maiden voyage.[1] After arriving at Pandaria, the gunship comes under fire by Alliance naval troops and is forced to hover over land - but comes under fire from Alliance ground troops, stationed at Thunder Hold.[2]

Some members of the crew (between them the player, Nazgrim and Dubs) left the airship to attack directly the stronghold but, after being confronted by them, Captain Doren of the Alliance forces escapes with a gyrocopter, managing to deal a fatal blow to the gunship in the meantime. This causes the Hellscream's Fist to crash violently to the ground,[3] leaving half the vessel on the cliff and the other half in the sea (and almost taking down the Morningbreeze sisters' air balloon with it).

Of all the crew members that still were on the gunship, only a few managed to leave it in some way before the crash (namely Kiryn, Shokia, Gorrok, Rivett Clutchpop and Zin'Jun with his pet Snuff; all the others, presumably, died in the crash.