For the Ruins of Ahn'Qiraj helmet, see 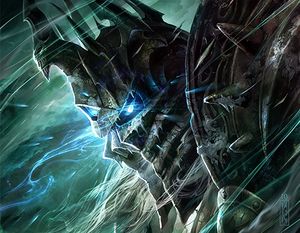 Arthas wearing the Helm of Domination.

The Helm of Domination[1][2] (also referred to as the helm of the Lich King[3] or Lich King's crown[4]) was a magical helm used to control the Scourge.

The Helm of Domination was crafted at the Forge of Domination[5] by the demons of the Burning Legion[6][7] both for containing the spirit of Ner'zhul and granting him his Lich King powers. The helm, and Ner'zhul's spirit, were sealed within the Frozen Throne from which the Scourge was controlled telepathically over a long distance, forcing it to obey the wearer's will.[3] The runeblade Frostmourne was originally also sealed inside the Frozen Throne,[8] but Ner'zhul cast it from the throne so it would eventually find its way to Arthas.

When Illidan Stormrage attempted to destroy the Frozen Throne and Lich King at the order of Kil'jaeden, Ner'zhul used the helm's powers to command Arthas—having become Ner'zhul's greatest death knight after taking up Frostmourne—to journey from Lordaeron to aid him.[9] After Arthas defeated Illidan, Ner'zhul also had Arthas himself shatter the Frozen Throne in order to free Ner'zhul from his prison. Arthas would then don the helm, merging his soul with Ner'zhul's spirit and become the new Lich King.[10][11][12]

Years later when Arthas was killed at the end of the War against the Lich King the helm was passed to Bolvar Fordragon who became the new Lich King in order to prevent the Scourge from running rampant.[13] Following the Fourth War yet a few years later, Sylvanas Windrunner ventured to Icecrown Citadel after having abandoned the Horde and fought against Bolvar atop the Frozen Throne. While the helm made Bolvar immensely powerful, Sylvanas still managed to defeat him and seized the helm after winning the battle. Assuming she intended to become the Scourge's new master, Bolvar remarked that the helm's power would be her prison, however Sylvanas countered that the world itself was a prison and split the helm in two, thereby piercing the veil between Azeroth and the Shadowlands.[14]

The Plate of the Damned, which is described in the Manual of Monsters to be combined with the Helm of Domination, makes the wearer nearly invulnerable.[10]

Angrathar the Wrathgate is crafted to look like the Helm of Domination.[15]