Helya is the ruler of Helheim, the underworld of the cursed and fallen vrykul who do not ascend to the Halls of Valor.[6][7] In ages past, she was a titan-forged watcher and sorceress and the adopted daughter of Keeper Odyn. When she spoke out against Odyn, he forcefully transformed her into the first of the spectral Val'kyr, tasked with bringing the souls of fallen vrykul to the keeper's Halls of Valor to become his Valarjar champions.[8]

The corrupted keeper Loken eventually convinced Helya to turn against Odyn by imprisoning him and the Valarjar in the Halls of Valor. She subsequently created her own afterlife, Helheim, where unworthy vrykul souls are transformed into vengeful kvaldir.[9] Helya created the Helarjar as a mockery of Odyn's Valarjar.[10] The kvaldir drag the souls of the unworthy and dishonorable to Helheim for Helya, as well as raiding the coasts and taking the souls of those they kill, thus robbing Odyn of potential champions.[11][12] 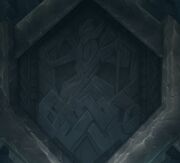 A relief of Helya in Haustvald.

Helya was originally a gifted titan-forged sorceress who battled the forces of the Old Gods under the leadership of the keepers. After the keepers defeated the Old Gods' elemental servants, Highkeeper Ra called on Helya to aid him in crafting the Elemental Plane as a permanent prison for the Elemental Lords and their minions.[13] In addition, the two crafted the Highkeeper's Ward to act as a key to the pocket dimension.[14]

Over the ages, Keeper Odyn came to see Helya as his adopted daughter. When the keepers decided to ask the Pantheon to empower the Dragon Aspects for their heroism against Galakrond, Odyn was vehemently against it, stating that only titan-forged could be trusted to defend Azeroth. The Aspects were empowered despite his objections, and so Odyn ordered Helya to magically tear off a section of Ulduar and raise it into the sky, creating the Halls of Valor. Odyn then told the vrykul that those who died a worthy death in battle would have their spirits brought to the Halls and given new bodies to fight as his Valarjar, which Odyn thought would be better defenders than the dragons. In order to retrieve the spirits of the deceased, Odyn would need vrykul to volunteer to become undead and take those spirits from the Shadowlands. Since no one was willing to make this sacrifice, Odyn decided he would need to create his servants by force. Helya objected, and the argument between her and Odyn grew so heated that she threatened to return the Halls of Valor to Ulduar. Seeing Helya's disobedience as a threat to his plans, Odyn shattered her physical form, twisted her spirit into the first Val'kyr, and ordered her to begin ferrying vrykul souls from the Shadowlands as well as transform other unwilling vrykul into Val'kyr.[8] Odyn would later lie to his followers that Helya's transformation had been due to her own arrogance: he claimed that during their argument, she had reached out for the power of the Shadowlands and subsequently gotten sucked into the realm, destroying her body and transforming her into a twisted wraith before he managed to pull her out and that she had subsequently apologized and begged him to make her a Val'kyr.[15]

Helya nursed resentment against Odyn for thousands of years, until the day Loken, a keeper who had been influenced by Yogg-Saron, reached out to her and promised to free her if she turned against her master. Helya used the same magic that had been used to lock the Elemental Plane to seal Odyn and his Valarjar army inside the Halls of Valor and then decided herself to become the caretaker of vrykul souls in her new realm Helheim. The darkness that had long festered in her heart transformed Helheim into a dark, nightmarish place, and the vrykul souls who arrived there soon turned into Kvaldir.[9] Shortly after Helya sealed the Halls of Valor, she was found and attacked by Ingvar, one of the few Valarjar who had been outside the Halls at the time. Ingvar almost managed to kill Helya with his weapons, the Warswords of the Valarjar, but Helya overpowered and destroyed him, subsequently keeping the warswords as a memento of her victory over Odyn.[16]

Over millennia, Helya claimed as many souls of slain vrykul as she could, further swelling the ranks of the Kvaldir. She eventually began to go after the living as well, sending her Kvaldir to kill anyone about to learn the truth about the conflict between her and Odyn. She began raising her own champions, the Helarjar, and had them search Azeroth for her enemies. Eventually, a kvaldir named Vigfus Bladewind caught Helya's attention after distinguishing himself in battle against vrykul. Helya gifted him with the Warswords of the Valarjar and committed some of her own power into the blades, increasing their lethality and making it easier for her to claim their victims' souls. Vigfus went on to serve as Helya's champion for millennia and used the swords to kill countless vrykul heroes.[16]

Mueh'zala would introduce Helya to the Jailer, bringing her to his side.[17]

The pact between the Val'kyr queen and Banshee Queen.

Helya attacking the Naglfar in the Maw of Souls.

Helya appears making some sort of deal with Sylvanas Windrunner.[18] It is later revealed that Helya granted Sylvanas a magical lantern called the Soulcage, with which Sylvanas intended to subjugate Eyir.[19]

When the order leader and Ashildir approached Helya to release them from the Helheim, Helya agreed that she would so only if they killed her champion.[20] However when her champion Geir was slain Helya grew enraged and declared that the pair would pay for killing her darling pet.[21] Thus despite fulfilling their end of the bargain Helya refused to fulfill hers and declared none would leave Helheim while she ruled. However, an unknown force guides the order leader and Ashildir out of Helheim to Helya's shock and rage, with Ashildir pointing out that it seemed that even Helya must honor her word.[22]

She is the final boss of the Maw of Souls and escapes before she is killed, warning that the adventurers have merely survived the storm and that the seas are unstoppable.

In Rockaway Coast of Highmountain, Helarjar Ritualists tried to summon the Vision of Helya, but were stopped by the order leaders directed by Odyn.[23] At an unknown point in time, Helya stole the soul of Illidan Stormrage out of the Twisting Nether and brought him to Helheim.[24] Xe'ra and the Illidari speculate that Gul'dan struck a deal with Helya to get him there.[25]

When Odyn discovers that Helya's forces are able to transform his stormforged Valarjar into Kvaldir, he decides that he has had enough and sends adventurers to slay her. With her defeat, the Keeper Odyn was freed from the curse that imprisoned him within the Halls of Valor and the soul of Illidan Stormrage was saved.

While on island expeditions, adventurers can discover a Ring of the Reefs that was granted to powerful kvaldir mistweavers by Helya herself. Sensing Helya's power on the ring, the adventurers bring it to Valdemar Stormseeker, who claims that Helya wasn't truly defeated and that she is now growing in power, saying "You cannot kill death!".[5]

The kvaldir encountered during the expeditions reference a "she" and "her", likely alluding to Helya:

Helya in the Maw.

Helya returns as part of the Mawsworn serving The Jailer. Helya appears in the Maw as adventurers, Anduin Wrynn, Jaina and Thrall cross a bridge over Gorgoa, the River of Souls and casts them down from the bridge into the river of souls.[26]

Helya appears as a projection being told by Lysonia that a ward has been sabotaged as Helya hears this she disappears and her allied forces of Maldraxxus with the flying ziggurat Zolramus invade Bastion and ransack the Temple of Courage.[27]

Helya was known for hoarding many powerful trinkets and artifacts brought by the souls who arrived in Helheim.[3]