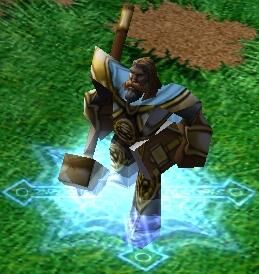 The paladin Uther the Lightbringer as seen in Warcraft III.

A hero (also called a hero unit, or rarely a legend) is a unit-type in Warcraft III: Reign of Chaos and the expansion Warcraft III: The Frozen Throne. Heroes are very special units. They have the ability to advance in levels, collect items in a small inventory, and confer special benefits to the units near them. In many ways, they are the leaders of your other units.

The experience a hero gets for killing a unit is based on the unit's "level". Unit levels are fixed unlike heroes.
The experience gained after level 1 is (Previous level xp gained+(5*(level+1))).
Example progression:

Summoned units give 50% of this experience.


Experience for killing creeps is reduced (only in Frozen Throne) to a percentage based on the hero's level:

The experience given for killing a hero is as follows:

This affects all experience gain--both from killing creeps and enemy units.

(These lists are very similar, and overlaps each other to some degree)