Not to be confused with Bookie Herod. 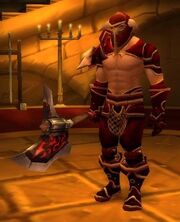 Herod <The Scarlet Champion> was a level 37 elite human boss found in the Scarlet Monastery's Armory. He used and dropped

[Raging Berserker's Helm] and the axe

Herod is one of the four Scarlet Crusade leaders in the Scarlet Monastery. It is known that both Raleigh the Devout in the Hillsbrad Foothills and Varimathras in the Undercity are determined to eliminate the leadership of the Scarlet Monastery, albeit for different reasons. 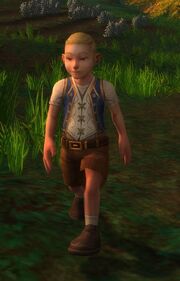 Herod can be found in the Old Hillsbrad Foothills in the Caverns of Time, where he is known as Herod the Bully. It seems his reputation for brutish behavior started early.

A shadow of Herod appears as a part of Argent Confessor Paletress encounter in Trial of the Champion, where players face random memories of past bosses.

Herod was replaced by Armsmaster Harlan.

A full group of properly leveled players should be used when attempting to defeat Herod. His melee damage is impressive and can put a huge hurt on cloth-users. A Healer should stay behind and focus on healing, as with any boss fight. It is advisable for the ranged dps and healers to remain on the stairs to avoid Whirlwind, however, the Healer must be careful not to lose line of sight to the Tank.

Herod will initially perform Rushing Charge, exactly like a Warrior's

[Charge], to the player who draws first aggro. He will proceed with basic melee swings until he's lost a good deal of health. He will then initiate a

[Whirlwind]-like attack (signaled by the quote below) that will render him invulnerable to spell damage. This attack deals AoE damage to anyone standing close by, so players should just run out of range and anyone able to use a ranged weapon should be shooting at him. Hunters should make sure to pull their pets back as well.

If your Healer has a low mana pool, or is not the proper level for this instance, have everyone bandage if they get hit by Herod's Whirlwind attack, so the heals can be focused on the Main Tank.

After Herod is defeated, twenty Scarlet Trainees will spawn. Do not be intimidated, as they can be taken out with one hit. If there is a Mage present, they should use AoE attacks to wipe them all out.

Also, if you try to run outside the room, Herod will sprint, increasing his movement speed by 60% and almost certainly catching up to you; if you don't get affected by this, 3 Scarlet Myrmidons will spawn and block your path.