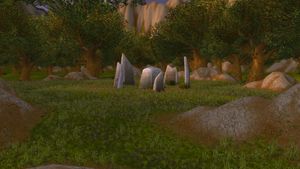 Heroes' Vigil is the central area of the Stone Cairn Lake island in eastern Elwynn Forest. It features a ring of stones, and a monument called the Stone of Remembrance which commemorates the dead from the orcs' sacking of Goldshire and other nearby regions during the First War. The island itself is controlled by Rogue Wizards who can be quite dangerous to inexperienced adventurers.

The body of Henze Faulk is situated here.

The area being described as a once-great "bastion of faith" could imply that a church was once here during the First War.