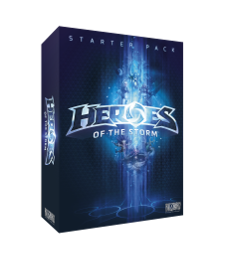 Heroes of the Storm, often shortened to Heroes or HotS (even though "HotS" can also refer to a Starcraft II expansion), is a Blizzard Entertainment "hero brawler" game which was initially inspired by the Defense of the Ancients custom map for Warcraft III. The game features characters from across the Warcraft, StarCraft, The Lost Vikings, Diablo and Overwatch franchises, who are seized by an unknown force and brought together in a mysterious location known as the Nexus to do battle.

On December 13, 2018, Blizzard decided to pull some developers to other projects and announce that the Heroes Global Championship and Heroes of the Dorm will not return in 2019.[1]

Heroes of the Storm is a team-based competitive game in which each player controls a powerful hero with unique abilities, and works with his or her team to invade and destroy the enemy team's base. However, it has a number of features which set it apart from other DOTA-style games. Experience is shared between all players on a team (so there is no benefit to last-hitting). There are no purchasable items (but characters can be customized by learning talents as they level up). All skills are unlocked at the beginning of a match. Games are intended to last for about 20 minutes each, and each map has unique objectives.[2]

88 hero characters that are playable are:

One of the game's features is the ability to purchase or earn skins for each hero, with each skin often available in different color schemes alongside the 'traditional' colors. Some skins represent characters from the past, a different timeline, or even a parallel universe such as:

A model for Gelbin Mekkatorque has been shown been shown at past BlizzCons but he isn't currently in-game. Other characters Blizzard have considered from the Warcraft universe include Aggra, Azshara, Brann, Cenarius, Dagg'um Ty'gor, Dr. Boom, Gallywix, Grom, Harth, Hogger, Kil'jaeden, Moira, Varimathras, Vashj, Velen, and Vol'jin.[3]

Battlegrounds or maps are the battlefields upon which the heroes do battle and matches are fought. Each battleground has a different layout as well as unique features that set it apart from the others.

14 battlegrounds that are currently playable are:

Skins from other franchises heroes merging into Warcraft

Creatures summoned by Warcraft heroes unique to Heroes of the Storm