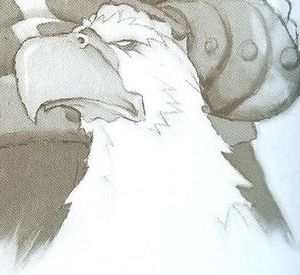 A gryphon that may be Hestra in the Alliance Player's Guide.

Hestra may be the gryphon mount of Falstad Wildhammer, he states "By Hestra's wings". The gryphon is well trained and is the best mount he ever had. Hestra is akin to a dog rather than a part-leonine beast and will jump on top of his master wagging his tail before being told to get off. Falstad keeps a tiny whistle which enables him to summon the gryphon.[1]

Hestra carried Falstad over the Great Sea between Hasic and Khaz Modan. They departed ways after Falstad and the elven ranger Vereesa were lured into a ground trap akin to a quicksand by the goblin Kryll.[2] Later he was able to call the beast to escape the fortress of Grim Batol with Vereesa and Rhonin. From the gryphon they witnessed the battles taking place between the orcs and the hill dwarves on the ground, and Deathwing and the dragons in the air.[1]

Hestra's status is unknown. He has not appeared at any point in World of Warcraft despite Falstad's increased inclusions after the forming of the Council of Three Hammers. In addition, in all appearances where Falstad is partnered with a gryphon, it is with Swiftwing; including Heroes of the Storm. When defeated in Ironforge, Falstad will attempt to say "Bury me with me gryphon", a remnant from when Kurdran Wildhammer (who shares Falstad's voice actor and whose gryphon, Sky'ree, passed away) was the Wildhammer council member. Assuming that the line was not simply kept by mistake, it is possible Hestra has died since his appearance in Day of the Dragon; explaining the retaining of such a quote as well as why Swiftwing has replaced him as Falstad's gryphon.