For the original version of the encounter, see Hex Lord Malacrass (removed).

Hex Lord Malacrass is a boss of the level 85 version of Zul'Aman. He is the fifth boss of the instance and is located inside the temple on the east end.

Rumored to be the most feared witch doctor of the Amani tribe in decades, Hex Lord Malacrass has done the unthinkable and sealed the essences of several mighty troll animal gods in their strongest champions ... keeping the darkest one for himself.

Hex Lord Malacrass spawns with two random adds. Your party should kill any adds it cannot reliably crowd-control for the duration of the encounter. Malacrass will alternate between channeling his Spirit Bolts ability, dealing a moderate amount of damage to the entire group, and casting Siphon Soul every 30 seconds.

It is important to be aware of classes that grant Malacrass a healing ability (Death Knights are the most commonly overlooked) as the fight can become increasingly difficult to heal if allowed to drag on too long. While Malacrass does not gain a stacking damage buff like in the original the AOE damage of his abilities can become very taxing on healer mana.

Death of an add

Soul Siphon
Your will belong ta me now! 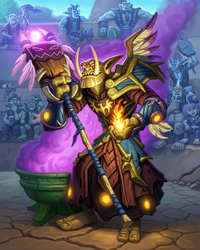 In the Hearthstone expansion Rastakhan's Rumble, Malacrass serves as the champion of Jan'alai's Dragonhawks, a fire-obsessed team of troll mages, and appears as a legendary mage card. His flavor text reads: "Extremely awkward cousin of Hex Lord Malaclass."