Hex Lord Malacrass is the fifth boss in Zul'Aman, the final obstacle before the raid can do battle with Zul'jin.

Malacrass had studied the Zandalari high priests and their ability to call upon the favor of the animal gods. He also knew that the elves had magically bound one of the mighty naaru, using it to channel the power of the Light into their own ranks. Malacrass had devised a similar plan: to seal the power of the animal gods within the bodies of the Amani's strongest warriors. Zul'jin quickly approved the plan and lent his full support. Malacrass experimented tirelessly and succeeded in imbuing four warriors with the essence of mighty animal gods: the lynx, dragonhawk, bear, and eagle. Some adventurers fear that Malacrass may have bound a fifth, even darker essence within his own soul....

Hex-lord has 4 adds (described in more detail below). Each add is a different mob type and has differing abilities and will need to be CC'd, off-tanked, or killed.

During the entire fight, the Hex Lord will melee damage his highest threat target for (amount?). He will also use an ability called Soul Drain which gives him several abilities from a single class for 30 seconds (described in more detail below). After his Soul Drain buff wears off he will lose his class abilities, stop melee dps, and cast Spirit Bolts on all members of the raid. As soon as he is done with the Spirit Bolts, he will immediately cast Soul Drain and gain a different classes' abilities (unless he drains the same class or player, which is not uncommon) for 30 seconds. Alternating between the Soul Drain phase and the Spirit Bolt phase is basically the entire fight. After the Hex Lord reaches 80%, his Soul Drain also gives him a stackable buff which increases his size and the damage of his melee, Soul Drain abilities, and Spirit Bolts. The longer you take to kill him, the harder he becomes.

Key factors of the fight are:

He starts with 4 random adds, much like Moroes from Karazhan. There will always be a sap/sheepable, hibernatable, banishable, and shacklable mob but additional CC types may come in to play as well. Possible adds are:

Every 30 secs, Malacrass uses this ability, which deals 450 shadow damage to every member of the raid every 0.5 sec for 10 seconds. Can be resisted, but is not subject to line of sight. It increases in damage with each Soul Drain. Testing has shown that

[Amplify Magic] does not change the overall damage for a Spirit Bolt volley. Therefore, Amplify Magic can be placed on the raid and the damage taken from the Spirit Bolts will not increase, thereby providing a nice increase to raid healing. The downside is that certain stolen class abilities (like a mage's) appear to do extra damage to Amplified targets. (Additional testing is desired over anecdotal evidence.) A Paladin's Concentration Aura (especially improved with talent points) is invaluable for allowing the raid healers to avoid pushback from the bolts.

Immediately after Malacrass finishes casting Spirit Bolts, he uses Soul Drain. Soul Drain is a channeled debuff that is placed on a random member of the raid. The person drained will not suffer any direct penalties, but Malacrass will gain some abilities from the target's class, which are outlined below. He has these abilities for 30 secs until he starts casting Spirit Bolts again, after which he will Soul Drain another (or the same) class. This continues for the rest of the fight. 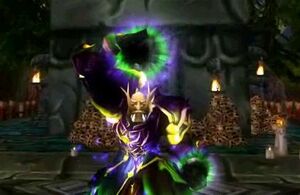 Before starting the fight establish control methods and kill order for the adds present. Some raids may find it more useful to maintain crowd control on one or more adds through out the fight, while others will have enough DPS to kill all adds before beginning DPS on Malacrass. Note that Malacrass does not start stacking the Power Drain debuffs until his health reaches 80%. If the stacking debuffs are a problem, kill all four adds before attacking Malacrass. The raid will then not have to spend mana, casting time, and cooldowns keeping adds controlled.

Focus on quickly killing the adds. Be careful not to start killing AoE-attack capable adds (like Slither) during Spirit Bolts.

Spirit Bolts will be cast every 30 seconds and last 10 seconds. Spirit Bolts can not be avoided via line of sight. Rogues should focus on using Cloak of Shadows to mitigate some of this damage.

Following Spirit Bolts, Malacrass will select a new target for Soul Drain randomly from the raid.

After dropping Malacrass to 80% health he will begin to use Power Drain once every 30 seconds, increasing his size and damage by 10% and reducing all player's damage/healing by 1%. Once Malacrass begins Power Draining the DPS race begins because he will eventually become buffed enough to wipe your raid during Spirit Bolts.

Death of an add

Unused quotes
Have ya gone mad? You be the death of us all!