For other uses, see Heyman. 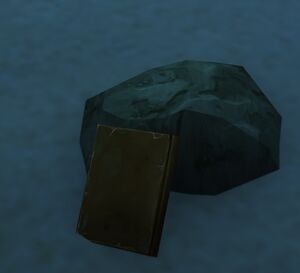 Heyman's Journal is located at Heyman's End in Val'sharah.

<The majority of the prior pages are illegible as are many of the subsequent ones. Not due to age or damage, just really awful handwriting. What can be made out reads as follows.>

...having made it safely off the Isle of Thunder, I requistioned a new boat and a new crew and set sail again. While my benefactor seems to have an inexhaustible amount of wealth to fund this expedition, I often find myself running low on patience. Perhaps our new destination will merit some clue as to where this "Underlight" relic exists.

I've followed all the clues, I've read all the texts and I believe I've finally found its resting place. I bet that old sea witch never thought to look so close to the Tomb. Nevertheless, there's an island on the horizon that we're quickly approaching, and some larger mass of land beyond it. We shall weigh anchor fairly soon and then get set to start exploring.

Typical. Just typical. We approached the island and were immediately attacked by what I can only describe as the largest Light-forsaken murloc I've ever seen in my life. Had a huge dingly-dangly thing extruding from its head with the most glorious light on it I've ever seen.

I quickly grabbed my things and as I plunged into the watery depths, the light from his dingle-dangle illuminated a nearby cave. I swam as fast as my body would allow and luckily made it inside. However, I fear fate has decided this will be my final resting place as the entrance has collapsed. Probably due to that demon murloc rampaging about.