The Hidden Circle[1] is an Alliance rogue organization based in the Forlorn Cavern of Ironforge.

The guild is currently led by Hulfdan Blackbeard,[citation needed]  and they have operatives working in Khaz Modan who work to collect valuable gems through illegal means, specifically targeting King Magni Bronzebeard's strip mining products. The organization is being investigated by agents of the King, and several members have been arrested.

[10] Road to Salvation are considered members.

No one (except for maybe Hulfdan Blackbeard himself) can really tell how many members the Hidden Circle has due to the nature of the organization.[citation needed]

It is known that the organization have sent recruiters to Kharanos in Dun Morogh, where they work to recruit young rogues of the Alliance. Many young rogues have yet to find their place in the world, and the recruiters know this. They promise the new recruits that they will help them find "the road to salvation" and give them a purpose. Hogral Bakkan is one of the guild's recruiters and during the quest

[10] Road to Salvation he sends young players to speak with Hulfdan. 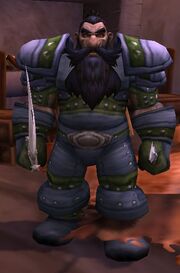