The Hidden citadel[1] is a vast fortress of the nathrezim Highlord Xaraax of the Burning Legion and the Hidden, bearing its moniker. It is inhabited by demons and arakkoa alike.

Malus, too reliant on the arakkoa support to go anywhere devoid of arakkoa strongholds,[2] was stationed in the great arakkoa citadel south of Falcon Watch in Hellfire Peninsula.[3] Both of them were searching for the Diamond Blade and its naaru in order to unleash the Darkstorm upon Azeroth. 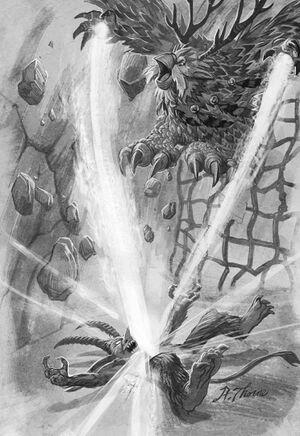 Galena Stormspear in her moonkin form blasting an imp. 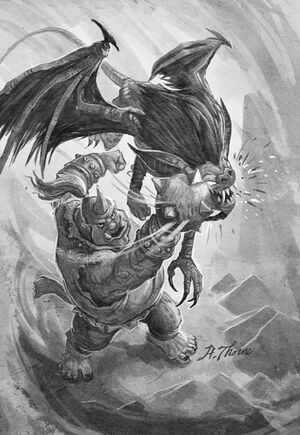 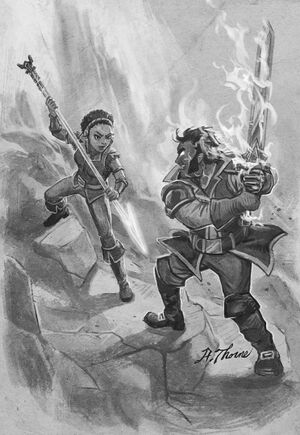 It is divided into a lower section and an upper section. The big castle's upper section contains a prison, and it looked like a series of caves, being laid out in concentric rings of brambles and stone, rising higher and higher, ending in a black gate that guarded the entrance to the highest ring which contained a cavernous chamber, the vaunted sanctuary of Xaraax, a twisted rock chamber as tall as a cathedral, with gold and green lights casting shadows along the thin windows. Behind his throne and altar stood the balcony. The altar was a stone base for a purple mass of liquid shadows, moving and whispering dark secrets of the Twisting Nether.

There are also a war room[4] and a chamber for Malus which had a portal with its other side containing Malus' items. In the center there is a massive, open-air fortress, the ceiling made up entirely of tightly knit brambles and branches. Arakkoa and demon nests dotted the palace, the armies of Xaraax practiced their torture methods in the rotunda below. According to the ogre Throgg, it smelled of bird droppings and sulfur from the demonic pits below. It has several entrances.

At some point after the Cataclysm on Azeroth, Malus on the Inevitable attacked and destroyed the Wavestrider,[5] taking its captain, his own brother, Greydon Thorne captive. He imprisoned him in the stronghold's prison, holding and torturing him for nearly two months.[6]

After Malus became King Gordok, leader of the Gordunni ogres and established Gordok's Elite, he asked Ssarbik returned to the citadel via portal in order to reach his ship, the Inevitable, sailing to Gadgetzan.[7] However, the two remained in the citadel for almost a week, before getting to the Inevitable.[4]

A few weeks later, Malus managed to capture Aramar Thorne as well, putting him in a cell next to his father. Afterward, Malus remained here and was guarded by a dozen Gordunni ogres. Later, Throgg hurried to tell him that an arakkoa scout witnessed an army marching on the citadel. The demons and arakkoa began battling the Woodpaw gnolls and Feral Scar yetis in front of the citadel. Eventually, Makasa Flintwill's main companions signaled the Everstill murlocs who swarmed the demons in the citadel. They were soon joined by One-Eye and her wyverns, Elmarine, and Telagos who used his frost magic, summoning a cone of frost that hardened, sealing off demons from retreating, and making it difficult for enemies to leave the citadel. Makasa, Murky, Hackle, Galena, and Reigol Valdread then continued inside, with Makasa and Reigol hurrying to deal with Malus while the others found and freed Greydon and Aram.

In the meantime, Malus came to Xaraax to his sanctuary, but the nathrezim demon lord turned on him and attacked because he ran out of its usefulness. He took the hilt of the Diamond Blade from his body and proceeded to get the Hidden to the top of the citadel. There, Makasa and Reigol made their way and fought against Throgg and Karrga but lost. The two ogres dragged the family into the chamber behind them where Xaraax and the Hidden awaited them. Zathra approached Makasa to retrieve the blade. As she took it, she quickly dropped it because it was too hot for her. Soon, the hilt from the demon lord's hands soared to the blade, the weapon reforging itself and becoming whole. A shocked Throgg dropped Makasa who leaped at the weapon. With the weapon and Voice of the Light in her hands and head, she charged at Xaraax. The Highlord, however, had a weapon on his own, a fel sword matched the Diamond Blade, knocking it from Makasa's hands. Immediately, Ssarbik enveloped her with shadow magic, and Xaraax went to drop his fel blade and grab the Diamond Blade. He corrupted the hill and the dark power started to creep upon the blade.

Xaraax, preparing to destroy the naaru and release the Darkstorm upon Azeroth, did not expect that the broken Malus would hurry to take the dropped fel sword and stab Xaraax into his back and through his chest. Losing the Diamond Blade, Malus tossed the impaled dreadlord into the altar that swallowed the Highlord, hoping it would send him into the Twisting Nether. Malus kept the weapon and ordered Ssarbik to summon him ogres and imps to feed the Darkstorm while they will wait for Greydon to feed it. Throgg shouted in protest, but the fel-corrupted Malus ignored him. Soon, the Gordunni in shadowy shackles were brought to Malus by a jailer. A portal, the swirling vortex of the Darkstorm, emerged and sucked them and the imps, stunning Karrga in shock. She had been holding Valdread, but now the Forsaken slipped her and kicked the Diamond Blade towards Makasa. She quickly grabbed the weapon of the Light and blocked Malus' attack. The twisted human now called reinforcements and continued fighting. As fel and Light clashed, the roof exploded, the black vortex of the Darkstorm growing quiet for a moment.

At that moment, the freed Aram and the other friends managed to get to the chamber, witnessing a great battle against the Hidden and felbat demons. Karrga and Throgg turned on their former colleagues, fighting against the winged demons, with Telagos joining in as well. Aram found Makasa's former weapons and gave them to Greydon to fight. Zathra and her scorpid Skitter faced Greydon and Hackle - as Skitter was about to sting the gnoll, Thorne warned him, allowing Hackle to dodge the attack, but, ironically, the scorpid hit the Sandfury troll who succumbed to the poison immediately. Reigol threw a small dagger at Malus but soon redirected his target at Ssarbik, enacting his revenge upon his enemy by throwing a dagger into the arakkoa's heart. His sister, Ssavra tried to flee the chamber but was stopped by Galena's magic that rooted her.

Soon, the tide turned in favor of the children, defeating most of the Hidden and the demons. The two Thorne brothers faced each other, with Malus almost gaining the upper hand, but ultimately it was Makasa with her Diamond Harpoon, and with the assistance from Aram, that ultimately faced Malus - the defeated Malus gathered his last strength to toss his fel sword at Makasa, but Aram used his new-found druidic power to blast the blade away, giving Makasa the opening to leap and strike Malus fatally. The roiling black vortex that was the Darkstorm raged for a moment before it dissipated completely. With that, the Azerothians noticed Karrga and Throgg leaving together, and they let them. On their way out, Throgg whacked Ssavra, and she shrieked and clawed at the thorny roots holding her. Down below them, triumphant horns sounded when the enemies in the citadel's valley were defeated. With most felbats also defeated, the rest of the winged demons fled from the citadel at their master's demise. The Thornes, Makasa, and the others then left the citadel as well.[3]