High Abbot Landgren is one of the highest ranking leaders of the Scarlet Onslaught (formerly known as the Scarlet Crusade), perhaps second only to High General Abbendis. He first appears in the town of New Avalon, which was part of the great coastal city of Tyr's Hand until its destruction.

When the Scourge invaded and decimated the Scarlet forces at the Scarlet Enclave, Landgren, Abbendis and several other leaders of the remnant forces of the Crusade depart in ships and make their way to the Dragonblight in Northrend.

When Admiral Barean Westwind appears, Landgren's behavior changes dramatically. The admiral apparently received a new blessing from the Holy Light, which he "passed on" to the high abbot. From this a new sect of the priesthood is born, its members called Onslaught Raven Priests. 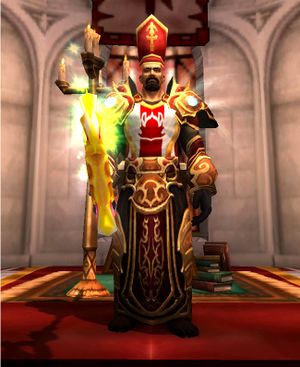 Archbishop Landgren, as seen in the Crimson Cathedral

[73] A Fall From Grace, players are sent with instructions to kill the High Abbot. However, Landgren is able to see past the player's disguise, stating that the "Master" told him. After the confrontation, he proceeds to jump off a cliff (to which he leads players), thereby committing suicide.

As it has been revealed that Admiral Westwind is truly the dreadlord Mal'Ganis in disguise, it would seem that Landgren has unwittingly served as a tool of the Burning Legion. Whether or not Landgren comes to discover whom he is truly serving is not known, but he appears to place his faith entirely in the grand admiral. He is eventually resurrected and reintroduced as Archbishop Landgren, appointed as the new leader of the Onslaught (though Westwind remains as the true mastermind behind the scenes, his location known only to a select few). He resides within the Crimson Cathedral at the Onslaught Harbor in Icecrown. After being killed a second time, the Ebon Blade's Lord-Commander Arete interrogates his spirit, then destroys it to prevent any further resurrections.

Archbishop Landgren shares similarities with the "Street Preacher" character played by Dolph Lundgren in the film "Johnny Mnemonic." In the film, Lundgren's character defies death several times before his final showdown with the protagonist, much like Archbishop Landgren is resurrected to further serve the Scarlet Onslaught.