High Arcanist Savor is a level 75 Forsaken mage located inside the Sunreaver's Sanctuary in Dalaran. 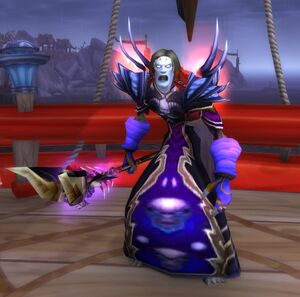 Savor on The Crimson Treader.

During the Purge of Dalaran, Savor was held captive by the Silver Covenant. At Rommath's orders, he was freed by a Horde adventurer and was said to go to Silvermoon City.[1]

Savor later takes up arms with the Sunreaver Onslaught, and accompanied them to the Isle of Thunder.

Savor is seen at his old spot in Dalaran above the Broken Isles.

The Purge of Dalaran

The Isle of Thunder