High Astromancer Solarian is the third boss of the Eye in Tempest Keep. She is a level ?? (boss) mage, but is attired in Voidheart Raiment, the Tier 4 armor for warlocks (most likely due to the fact that she transforms into a giant voidwalker towards the end of her fight.)

Since most of the damage dealt to the raid is arcane, some arcane resistance will help. It's a good idea if everybody brings their

[Violet Badge]. Players should not nerf themselves to obtain high amounts of resistance though.

Melee damage dealers are very effective because while Solarian is continuously spamming some spells, she can't dodge. During the adds phase, the tanks have to control 15 mobs, thus some solid AoE tanking is required. A good paladin tank can be quite valuable here.

During this phase, all ranged classes (healers and damage dealers) should stand close together on one spot. This makes it easier for people with the bomb debuff to get clear of everyone else, and AoE heals are more effective. During this phase and up until phase Three, she has no aggro table.

This is the main reason for wipes here. In irregular intervals, Solarian casts this debuff on a random raid member. The affected player immediately deals continuous AoE damage to others for 6 seconds, and then explodes. The AoE damage is a fixed amount, distributed evenly to all targets in range (thus if many raid members are close, they take only low damage). The explosion deals 5400-6600 arcane damage to everyone in a 10 yard radius, and throws everybody affected by it high enough into the air for about 90% falling damage. Upon landing, the person with the debuff is protected against falling damage, while everybody else is usually killed.

Raid members receiving the debuff must immediately get clear from all other raid members. This is the single most important aspect of this fight. If people are slow in noticing they are the bomb, then the addon SolarianAlarm which turns the entire screen blue for those with the debuff, may be helpful.

[Cloak of Shadows] and

[Divine Shield] no longer trigger the explosion instantly, so using these abilities is perfectly safe.

Most of the time, Solarian busies herself with spamming Arcane Missiles. Since they deal a substantial amount of damage, it's important that healers react quickly when a raid member is about to receive it. 2-3 healers should be dedicated to the task of keeping the arcane missile targets up. They can set up a macro to cast a quick heal on Solarians current target. It's rather risky to use slow heals here.

Shamans should keep up four totems at all times, since the arcane missiles do target them, and pop

or a focus version: (Solarian is focus, nice if you change targets frequently while healing group)

Every 50 seconds, Solarian disappears and 12-15 non-elite adds spawn from three "light portals". After 15 seconds, she re-appears together with two elite priest adds, and Phase 1 starts again.

During the 15 seconds of phase 2, the whole raid should concentrate in the center of the room, and start all-out AoE. People need to be very quick here, because Solarian starts her usual phase 1 routine right after she reappears.

This need for high speed puts the AoE damage dealers at a high risk - they cannot allow a lot of time for the tanks to build aggro (but still need to do so, else they'll die right away).

After 15 seconds, Solarian and two priest adds spawn from the beams of light. It's possible to determine from which beam the boss spawns - it's the one which is exactly on the circular border, whereas the two other beams which are not exactly aligned with the border spawn priests.

The priest adds will begin casting either Holy Smite or a healing spell on themselves or Solarian. Two tank+rogue groups can split off on the priest adds and have the tank handle the damage from Holy Smites while the rogue uses

[Kidney Shot] on any upcoming heals.

When Solarians health hits 20%, the fight turns into a simple "tank and spank" style combat (even if only a few raid members are alive the fight is usually won at this stage). She turns into a massive armored voidwalker and stops all of her former attacks. In that form, she has substantially increased armor, an arcane bolt attack and fears people in melee range. This fear can be avoided by the usual measures (

Firstly, as she is boss level, you will not be able to resist many spells. Arcane Missles and Blinding Light deals trivial damage and can pretty much be ignored.

The first aspect of the fight is Wrath of the Astromancer. This spell will launch you high into the air and extend the fight as you will be unable to do any damage. Strangely, even at such a height, Solarian and her reinforcements can still deal damage to you with melee attacks. However, it should be noted that you do not take any fall damage.

The second aspect of the fight is for her to reappear with 2 priests. These priests will heal Solarian and can extend the fight to ridiculous lengths. To go around this, do not kill all the Agents that are summoned before the priests, just do some damage to them. That way, the priests will then start healing the Agents rather than Solarian. The moment the priests come out, kill them as fast as possible, then the remaining Agents and back to the boss.

At 20% health, she will "become one with the void". At this point, the fight is esentially a tank and spank and you have more or less won.

She drops exactly 250 gold and a bunch of epic items.

Phase 3 (Voidwalker Form)
Enough of this! Now I call upon the fury of the cosmos itself.
I become ONE... with the VOID!

Death
The warmth of the sun... awaits. 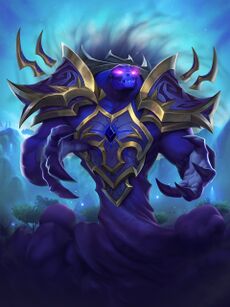 The Prime version of Solarian in Hearthstone.

Solarian appears as a legendary card for the mage class in the Ashes of Outland expansion for Hearthstone. Upon death, she shuffles back into the player's deck as Solarian Prime, depicting her as she appears when transformed into a voidwalker. Solarian's flavor text reads: "Loyal to Kael'thas Sunstrider, this blood elf mage sought arcane power in the Void. Did she find it... or did IT find her?"