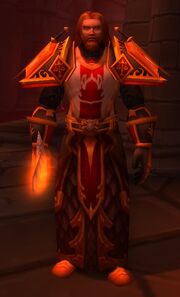 High Commander Michael Goodchilde is a human located at the Crusader's Chapel in the Scarlet Monastery. After the death of Sally Whitemane, Goodchilde took the remaining scarlet crusaders under his wing. He is described as a zealot, murderer, and a hardened knight who has dedicated his life to the eradication the undead.

He fell in battle against the Deathlord of the Ebon Blade, who sought to revive Whitemane as a horsewoman during the Burning Legion's third invasion of Azeroth.

The Light will unite the righteous to strike down the wicked[2]
Know that your sacrifice will bring me great glory this day[3]
You stand in judgement before the Light!
Our cause is just. Nothing will stand in our way.
"The Light is quickest when the situation is most dire."[4]

By the power of the Light I will banish you, scourge!
My faith... has forsaken me?