High Examiner Tae'thelan Bloodwatcher is the leader of the Reliquary, the Horde counterpart of the Explorers' League.

Tae'thelan has spent the better part of a lifetime training in the art of sorcery. Recently formed at the behest of an "unknown council" based in Silvermoon, the Reliquary has been reformed under Tae'thelan's leadership.[2]

He has a positive outlook on magic, and believes that with proper teaching, it is a force that can be utilized free of corruption.

Tae'thelan's ultimate goal is to unify his race as the proud, indomitable people they once were, and to break the magical addiction that has gripped them; to this end he seeks items of great power that could either cure or ameliorate his people's dependence on the arcane. Further, Tae'thelan also seeks to wield these artifacts of great power to increase Silvermoon's strength, as well as his own. He acknowledges that his people have made mistakes in the past, and is eager to ensure they are never again repeated.

Tae'thelan directs the Reliquary from his camp at Bloodwatcher Point, instructing various members of the Horde in the art of the dig. He opposes the Explorer's League in the Badlands, and discovers several titan artifacts around the Reliquary's dig-site.

He also appears in Uldaman, eager to claim the titans' secrets for the Reliquary.

Tae'thelan appears in Azsuna, directing members of the Reliquary (as well as both Alliance and Horde adventurers) in search of long-lost Highborne artifacts.[3] He later moves operations to Suramar, where he pursues the Orb of Sciallax, a lost relic presented to the elves during the War of the Ancients.[4] 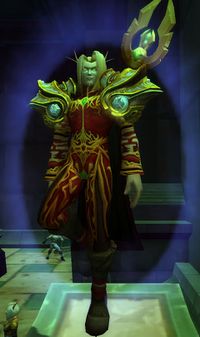 "Greetings, my name is Tae'thelan Bloodwatcher. I have spent the better part of a lifetime training in the art of sorcery and gathering like-minded Blood Elves to form the Reliquary.

You see, there are ancient, powerful relics found throughout this world that I plan to use to free my people from their addiction and unify them again as the proud, indomitable race we once were.

Magic is something to be embraced and, I assure you, a force that can be utilized free of corruption with proper teaching.

As it stands, the other races of the Alliance and even the Horde mock our kind for our half destroyed capital, still-standing statues of Sunstrider and blunder after blunder across the world.