High Inquisitor Fairbanks was the former High Inquisitor of the Scarlet Crusade (though his death may actually pre-date their proper founding). He used to be found in-game as a level 40 elite undead hidden in a secret chamber in the Cathedral of the Scarlet Monastery. His corpse is still located in the same chamber in the revamped Scarlet Monastery. 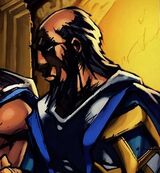 Fairbanks in the comic.

Fairbanks was Highlord Mograine's most trusted adviser, and was present during the meeting in Southshore that led to the creation of the Ashbringer.[2]

Fairbanks was tricked and led along with the Highlord by Mograine's son Renault to Stratholme where legions of the Scourge awaited them. Fairbanks was the first to fall, but did not die - he was trapped and hidden under the corpses of the undead. He bore silent witness to Renault's betrayal of his father, hearing Mograine's anguished cries as Ashbringer was plunged through his heart and fouling the blade. Kel'Thuzad later resurrected Mograine as a death knight.[3]

He managed to survive and returned to Hearthglen where he told the tale of betrayal to anyone who would listen. Those who believed him broke away from the Crusade to found the Argent Dawn. Fairbanks was subsequently murdered by the remaining crusaders for his blasphemy as well as possibly showing symptoms of the plague. His body was discarded in a secret chamber in the Scarlet Cathedral.

While dreaming, Darion spoke with Fairbanks who told him to go to Tirion Fordring.[4]

The undead Fairbanks could be found in a secret chamber in the Scarlet Monastery and could be killed but no quest originally required that. It is accessible by using a torch on the wall in the right prayer room behind the altar in the Cathedral.

The following section was retconned by the comic and no longer refers to the current lore.

Entering the monastery with

[Corrupted Ashbringer] equipped will trigger an event, whereby High Inquisitor Fairbanks is redeemed by the Highlord's ghost, freeing his spirit. Talking to him initiates an extensive dialogue with the player, which describes the history of the Ashbringer, and how to find the Highlord's other son in Outland, who can forge the blade anew. Despite popular belief, Fairbanks does not actually give a quest to create a new Ashbringer, or cleanse the Corrupted Ashbringer, or any quests for that matter.

Fairbanks can be seen during the in-game Old Hillsbrad Ashbringer event.

After the Cataclysm, the undead Fairbanks was killed by the adventurers sent by Dominic.[5]

High Inquisitor Fairbanks' undead body can be found in the secret room of Scarlet Monastery. He is lying on the ground lifeless. Perhaps, he may have found peace after the heroes collected his bounty from Dominic.

He is possibly related to Gerald Fairbanks and Officer Fairbanks.