Sally Whitemane was a priestess of the Light and the High Inquisitor of the Scarlet Crusade. She directed their activities from within the Scarlet Monastery's Cathedral until her death at the hands of adventurers and Lilian Voss. During the third invasion of the Burning Legion, Whitemane was resurrected as one of the Four Horsemen of the Ebon Blade. 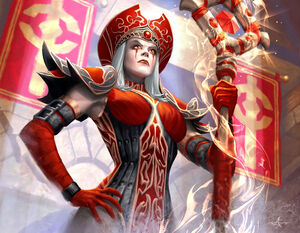 High Inquisitor Whitemane in the TCG

In the town of Southshore in Hillsbrad Foothills, a little Sally Whitemane used to play games of purifying monsters and slaying imaginary foes with her friends Renault and Little Jimmy,[2] all of whom would one day grow up to become members of the Scarlet Crusade. 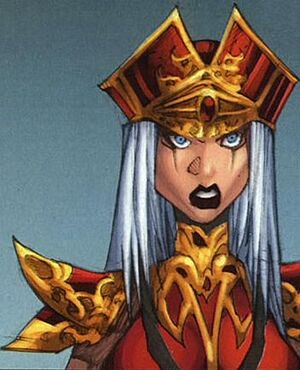 Whitemane in the Ashbringer comic

At a young age, Sally witnessed her family succumb to the horrific plague of undeath as they were traveling through northern Lordaeron. She was then forced to destroy her parents and siblings when they rose as mindless Scourge minions, leaving her racked by guilt and rage. Ever since that day, the fearsome priestess has found fulfillment and pleasure in only one thing: the cleanse and destruction of the undead.[3]

The Scarlet Monastery was once a proud bastion of Lordaeron's priesthood - a center for learning and enlightenment. However, with the rise of the undead Scourge during the Third War, the peaceful Monastery was converted into a stronghold for the fanatical Scarlet Crusade.[4] Under the Scarlet leadership and Whitemane's command, the members of the Crusade became even more extreme in their battle against the Scourge. Their grasp on reality was slipping and as time moved on, Whitemane and her followers no longer trusted anyone that was not part of their own Crusade, considering them plagued. Large numbers of innocent men and women were tortured and eventually killed because of this.[citation needed] 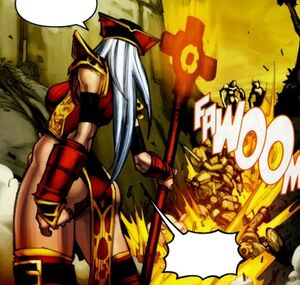 Sally appeared at Renault Mograine's side as a Scarlet inquisitor. She informed him that the Scourge was preparing to attack the town of Hearthglen. Judging that the Forsaken were not a direct threat, Renault ordered her to lead a squad to defend the city. She immediately took the road to the Western Plaguelands.[5]

While Hearthglen was falling into the hands of the Scourge, Sally arrived with the reinforcements and manage to kill off the attacking Scourge. Some time later, she appeared at the ceremony where Taelan Fordring became a member of the Scarlet Crusade.[6] 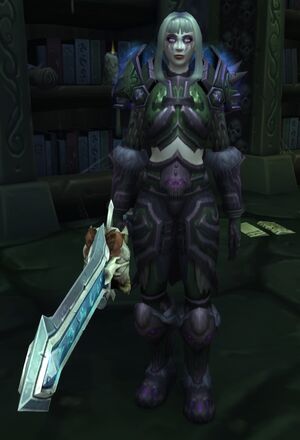 Whitemane as the Fourth Horseman

It is known that both Raleigh the Devout in Hillsbrad Foothills and Varimathras in the Undercity were determined to eliminate the leadership of the Scarlet Monastery, albeit for different reasons. The dreadlord of the Forsaken wished to end the continued threat of the Scarlet Crusade so close to his capital, and the human in Southshore believed the only way the Scarlet Crusade could be brought back to its original purpose was to remove the corrupted leaders including Whitemane. Although in time the other leaders succumbed, Sally survived.

After the Cataclysm, Sally and Renault became targets of Joseph, a Scarlet renegade who wished to reform the order, and also of Dark Ranger Velonara. Considering the fact that Mograine was long dead by the time of the Cataclysm, it is unknown whether the quest was considered canon or if it was put there purely for game mechanics.

Sally Whitemane survived the first assault upon the Monastery some years ago and returned to lead the forces inside, along with her new companion Durand, who replaced Renault Mograine as the Scarlet Commander. The reason she was still alive was because of her immense capabilities of resurrection. With the entirety of the former Scarlet leadership deceased, it was implied that Whitemane became the leader of the Scarlet Crusade, and with her demise, they would also falter.

The only way to make Whitemane's death permanent was to thrust her with two artifacts, the Blades of the Anointed. These swords were kept inside the Monastery and were retrieved by Lilian Voss and the adventurers. The small group made their way through the Monastery and after the battle Lillian stabbed the blades into her dead body, making her unable to resurrect again.

Ironically, Sally Whitemane was raised as an undead by Thassarian and the Deathlord to serve as the third member of the new Four Horsemen. While death rid her of her madness, her strong spirit remained.

After the failure attempt to retrieving the body of Highlord Tirion Fordring beneath Light's Hope Chapel in the Sanctum of Light, Darion's sacrifice was not in vain. Sally said that the Light ravaged his body and also there was nothing they could do to save Mograine.

Sally participated with her fellow Horsemen, the Deathlord, and Minerva Ravensorrow mounted on Daumyr to battle the demons on the Broken Shore. 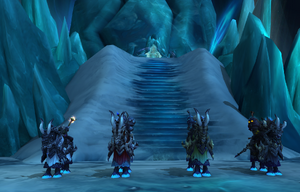 As the pandaren and allied races can become death knights, the four horsemen appear at the Frozen Throne. Darion Mograine sends the new death knights to travel to Orgrimmar if the death knight is Horde or Stormwind if it is Alliance and make a choice from the Hero's Call Board.[7]

After the Helm of Domination was destroyed and the Scourge began to rampage across Azeroth, Whitemane was the Ebon Blade's emissary to the Alliance.

Whitemane appears as a legendary card in Hearthstone. She was added in 2019's patch 14.6 along with several other cards to make up for the Classic cards moved to the Hall of Fame set. Her flavor text reads: "No one told her that champions want to sleep in."

In the Knights of the Frozen Throne expansion, Whitemane appears as one of the Four Horsemen that can be summoned by Uther of the Ebon Blade's Hero Power.

Whitemane is a playable character in Heroes of the Storm.[9]