For information on how to defeat Whitemane in her original appearance, see High Inquisitor Whitemane (Classic). For her lore, see Sally Whitemane.

Commander Durand compose the third and final boss encounter of the Scarlet Monastery.

At a young age, Sally Whitemane witnessed her family succumb to the horrific plague of undeath as they were traveling through northern Lordaeron. She was then forced to destroy her parents and siblings when they rose as mindless Scourge minions, leaving her racked by guilt and rage. Ever since that day, the fearsome priestess has found fulfillment and pleasure in only one thing: the destruction of undead.

The new military commander of the Scarlet Crusade attacks the players with a series of lightning quick strikes.

The High Inquisitor of the Scarlet Crusade comes to the aid of Commander Durand when he falls.

At 50% health, Whitemane puts the entire party to sleep and resurrects Durand. The players now fight both at full health. They use the same abilities as before. Whitemane also gets a new ability: 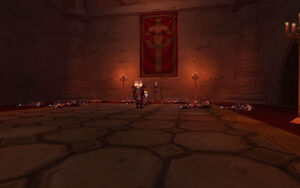 A Scarlet Zealot raises fallen crusaders in the cathedral. Whitemane can also raise these crusaders!

The Durand and Whitemane encounter plays out much like the original version of the encounter with Mograine and Whitemane. However, it is not necessary to clear the room before engaging the boss, as the trash is not linked with Durand. However, players should kill the zealot resurrecting fallen scarlets off in the east wing, to Durand's right.

Durand is first and is straightforward by himself. Try to spread out so that Dashing Strike does not hit the entire party. On his death, Whitemane will run out from her room in the back and should be focused on the tank. She has exactly as much health as Durand does. Dispel the Power Word: Shield casts. Any class with an interrupt must interrupt her Mass Resurrection spell. 100 yards extends outside the cathedral, so any mobs killed inside the cathedral proper will join the fight at full health! 100 yards also includes the big pile of scarlets in the east wing, to the right of Durand and Whitemane's, and this will very quickly cause a wipe.

When she drops below 50% health, she will put all enemies to sleep and resurrect Durand. Durand will then heal Whitemane and himself back to full health. Whitemane will continue to cast Mass Resurrection, so keep interrupting her! All told, to complete the encounter, the party will have to deal roughly four times Durand's total health to Durand and Whitemane.

Intro
Commander Durand yells: To think you've come so far, only to perish here. I'll honor you with clean deaths.

Whitemane enters
High Inquisitor Whitemane yells: You shall pay for this treachery!