"Trials of the High King" redirects here. For the Mogu'shan Palace encounter, see Trial of the King. 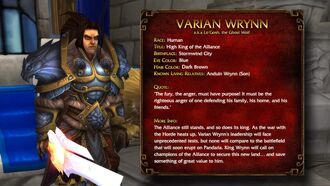 “Hm. I used to think that leadership was all about strength. I see things more clearly now - It's a little bit of give, a little bit of take. It's about binding people together. A bundle of sticks is not easily broken.”

The High King of the Alliance is the commander of all Alliance forces.[1] Much like the Warchief of the Horde, it is a position that is trying to coordinate the actions of all the races in the Alliance.[2]

During the Battle for Broken Shore, Varian Wrynn died and the High King title is now associated with his son, Anduin Wrynn.[3]

The role is not about faction-wide political control,[4] but something related to military control similar to Anduin Lothar's former position as Supreme Allied Commander.[5] The High King only has control over the forces given to him, and leaders who don't like his calls can choose not to commit their forces.[6][7] Even so, it proved to be hereditary, as Anduin Wrynn became the second High King after the death of his father Varian. This is rather odd, given the position is mainly military, and as such, was granted to Anduin before he was even an adult.

Despite criticism of a "Blue Warchief" replacing the idea of a variant of the Council of Seven Nations, Zarhym, the Community Manager at that time, said that the position of High King thematically fits the Alliance, because "the Alliance formed an allegiance around human kingdoms."[8] 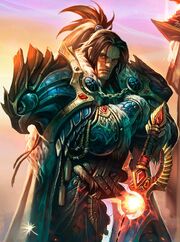 Trials of the High King

The "Trials of the High King" was planned to be an epic questline in World of Warcraft: Mists of Pandaria. King Varian Wrynn would be given tasks similar to the Labours of Hercules involving each of the Alliance races; each task pertaining to some important aspect of leadership to each racial leader. After accomplishing the task, Varian gains each Alliance racial leader's respect and is declared that race's High King. This was to allow Alliance players acting as his squire to learn more about him and his growth as a leader.[9]

Varian Wrynn's first trial happened in Patch 5.1.0. However, the development of Varian's character happens across the entire patch cycle and beyond - it doesn't all happen in one event or one scenario. His trials are many.[10] Although only two trials were implemented, the Trials of the High King showed how Varian banded the Alliance together and ultimately led them to victory during the Alliance-Horde war.

Trial of Patience: A Little Patience

The Horde have holed up in the Temple of the Red Crane, and Tyrande Whisperwind is ready to charge in to root them out. It is up to Varian Wrynn and a group of adventurers to lure the Horde troops out of the temple and kill Commander Scargash.

By displaying patience, Varian was able to lure out the Horde army from the Temple of the Red Crane and decimate them with the Alliance's hidden traps. The victory resulted in the annihilation of the Horde army and its commander with minimal to no casualties for the Alliance. This victory has impressed Tyrande Whisperwind who then pledges the night elves' support to Varian's command.

Trial of Loyalty: Blood in the Snow

One day, King Varian's scouts had discovered that Zandalari trolls threatened the dwarven capital by rallying the Frostmane trolls against them. Surely, the king thought, if he helped them with their troll problem, they would give him more troops for his campaign against the Horde. But what the King did not realize is that the dwarves did not trust one another. When Varian sought the help from the Council of Three Hammers, both Muradin and Falstad declined to offer aid in Ironforge's defense for they feared that if they left to fight the Frostmane trolls, the Dark Irons would take advantage of their absence to defeat the remaining clan and take over Ironforge. Frustrated, Varian argued that if no one would help, then Ironforge will fall under siege. Only Moira offered aid, stating that the Dark Irons will prove their loyalty to the Council, Ironforge, and the Alliance in the defense of Ironforge. And so Moira and the High King set out in the snow to save the city, leaving the others to think about their actions.

When they arrived at Shimmer Ridge, they discovered that their enemies were using an unnatural storm to prevent their forces from advancing on them. At Varian's request, Moira will lead her personal guard against the enemy troll village once the king's champions have stopped the magical storm protecting Shimmer Ridge. After rescuing the surviving mountaineers and slaying the elemental that the trolls were satiating with blood sacrafices to elicit the unnatural storm, the king’s champions regrouped with Moira’s Forgeguard and together their forces slew the Zandalari leader, and captured the Frostmane village.

In the aftermath of the battle, Varian commended Moira and the Dark Irons on their victory, even stating that the Bronzebeards and Wildhammers will regret not having been there to share in her glory. Moira however, humbly stated that her intention was to protect and impress, not to shame; to which Varian acknowledged that she accomplished just that. Both returned to Ironforge to announce her victory to the Council.

On their return, the other dwarven leaders were ashamed of their behavior and vowed never again to allow fear or distrust to cloud their judgment. And so it was a human king who helped to unite the dwarven clans so long divided. Free to trust one another, all three dwarven leaders pledged their full strength to the Alliance cause.

As tensions between the Horde and the Alliance exploded in Pandaria, Varian served as a mediator for the first time, tempering the cold tactics of war with an eye toward creating a lasting peace. This culminated in the invasion of Orgrimmar with the help of a Horde rebellion. Varian's success solidified his position as high king, the commander of all Alliance forces.[1]

The resolve of the High King of the Alliance was tested by the actions of Garrosh Hellscream, but Varian refrained from killing the former warchief after the Siege of Orgrimmar, allowing the orc to stand trial for his crimes.[11] 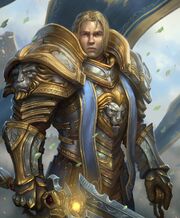 In the aftermath of the Burning Legion's third invasion, the citizens of Stormwind and the Alliance lost their leader, High King Varian Wrynn. Anduin lost his father and some of his innocence as he was entrusted with the command of the Alliance's armies amidst a violent war, a task he felt woefully unprepared for. Time and again, Anduin has used diplomacy to end conflict, inspiring even his warrior father to lay down arms in pursuit of peace. But diplomacy has its limits, and some villains can't be reasoned with. As the escalating war with the Horde threatens everything Anduin holds dear, he now guides his armies to seek new allies. His ultimate goal is to put an end to the bloodshed he so abhors... even if it means getting his hands dirty.[12]

Before the Storm focuses on Anduin Wrynn and his role of High King of the Alliance.[13] With the discovery of Azerite threatening to shift the balance of power in Azeroth, King Anduin has refocused the Alliance's efforts to preventing the powerful mineral from falling into the wrong hands and promoting diplomacy in order to prevent future wars fueled by Azerite. Anduin attempted to reconcile the humans of Stormwind with the Forsaken by initiating the Gathering event in order to promote unity. However, the Gathering ended in tragedy, and Warchief Sylvanas Windrunner has used the failed reunion to further alienate the Forsaken from their human counterparts.[14]

In response to the Burning of Teldrassil, the Alliance united under High King Anduin to retaliate against the Undercity during the Battle for Lordaeron. The two conflicts have reignited the war between the Alliance and Horde, as they battle for Azeroth and the Azerite proliferating from their dying world.

It is surmised that King Terenas Menethil II was the High King of the Alliance of Lordaeron, or served in a role similar to it following the Second War. Terenas was described as the "patron of the Alliance" and "formed a council of delegates from each of the seven kingdoms under his rule."[15] During the Invasion of Draenor, he outranked Turalyon and Archmage Khadgar, who served as his lieutenants, and engineered the Alliance Expedition.[16] Terenas went on to become the instigator of many of the Alliance's policies and military campaigns during the Invasion of Draenor up to the Third War.[17] However, Terenas was never officially addressed as High King, nor has he ever referred to himself using the title.