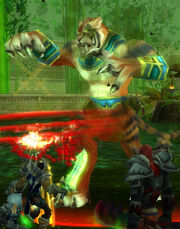 High Priest Thekal is the Zandalari[1] High Priest of Shirvallah, the tiger loa. Sent to Zul'Gurub to stop Hakkar the Soulflayer, he was eventually turned by the blood god.

While Thekal remains alive, he empowers Hakkar with

In order to quell Hakkar the Soulflayer, King Rastakhan sent a contingent of Zandalari High Priests into the ancient city of Zul'Gurub. Each priest was a powerful champion of the Primal Gods, or loa, but despite their best efforts, they fell under the sway of Hakkar and were forced to channel power into the blood god. Ultimately, Thekal and the other priests were slain by the adventurers who entered the city, and killed Hakkar.[1]

The encounter begins as a council fight. High Priest Thekal is joined by Zealot Lor'Khan and Zealot Zath, as well as two Zulian Tiger adds. In order to progress to phase two, all three council members must be killed within 10 seconds of each other. Otherwise, defeated members are resurrected with full health.

Upon successfully defeating the council, High Priest Thekal resurrects with full health and transforms into the Aspect of Shirvallah, permanently increasing his attack speed by 100% and gaining new abilities. Additionally, Thekal summons two Zulian Guardians upon transforming and once every minute after.

This fight is another two-phase affair. Phase 1 has three tanks grabbing the Priest and the Zealots. The offtanks take the Zealots about halfway to each corner of the lower area. The Priest is tanked just south of his hut. Lor'Khan needs to be far enough away from the others so he cannot heal them. Alternatively Lor'Khan can be mana drained by priests/locks and a hunter. Once he's at 0 mana a hunter can keep him down alone. Zath can be closer to Thekal, but again needs to be away from Lor'Khan.

Note: Zealot Lor'Khan has been confirmed that she's susceptible to chain rogue stuns - not sure if this also works for Zealot Zath. Also Note: Zealot Zath can both Gouge and Blind, so you need either two tanks to keep him controlled or a mage to stay second on the aggro list ready to blink to the tank upon gouge/blind. If you're really unlucky, he'll gouge one tank, blind the other, and go for the healer. Be on your toes.

All 3 can be disarmed in phase one, so be sure to do this whenever the cooldown is over.

Once the MT has enough aggro on Thekal, everyone attacks until 20%. They then switch to Zath, and take him to 15%. Finally, Lor'Khan is taken to 10%. Rogues need to kick and mages need to silence to avoid him healing, and making this a longer fight, and a potential wipe.

By this time, Thekal and Zath will be at around 10% as well. Then all that is needed is to kill all three in quick succession. It is recommended that most of the DPS kills Lor'Khan, and a few of the ranged start to kill Zath. As Lor'Khan gets lower, more of the DPS can move on to Thekal and Zath, but the Rogues must stay until Lor'Khan dies, since a Heal at any point will mean everyone has to either get back on Lor'Khan, or run out and start again. Once Lor'Khan dies, the Rogues and other melee can move on to Thekal, whilst the ranged finish off Zath.

An alternate strategy is to simply split into three groups and try to keep the DPS even all the way down, but this can be easily ruined by a single heal from Lor'Khan. By having Thekal and Zath at 15-10%, the Tanks can simply stand there and take a beating, getting healed, until Lor'Khan is ready to be killed. This strategy is more forgiving of lag, mistakes, and mistimed kicks/silences.

Another finishing off strategy is once you have them down around 10 percent health bring all 3 together and AOE as much as possible. This is an easy way to kill them all at the same time. From the time of the first death, you have about 10 seconds before they start resurrecting.

Some more info! As Zealot Lor'Khan can be stunned it really helps the healers out on conserving mana. You assign one healer for the tank with Lor'Khan. 2 healers on Zealot Zath's tank, and 3 healers on Thekal's tank. This worked for us and we didn't go out of mana by the time we pulled em all together and AoE'd em down when they were all low percent. The rogues chain stunning Lor'Khan is also good for kicking to interrupt the heals she can cast. In any case she does get a heal off during the AoEing, just have all single target DPS focus on her.

During phase 2 We pulled Thekal to the right side near where we tanked Zealot Lor'Khan and had the rest of the raid on the other side where Zealot Zath is tanked. We then have 2 mages polying the tigers as they come in. All extra melee DPS is tasked with breaking a poly of one of the tigers (hibernate and cheap shot work on these tigers also) and DPSing down these tigers down one at a time. Meanwhile, all ranged DPS focus on Thekal and you'll have two tanks for Thekal. Once Thekal does his AoE punch he'll lose aggro on the main tank. That's where the 2nd tank intercepts and brings him to his tanking spot. The old tank then takes his place for intercept *away* from the punch standing toward the middle. Note: It's a good idea to keep the tank in between the majority of the raid and the boss or else the punch will hit them as well.

Alternate Phase 2 Strategy: Since the AoE stomp is nearly unavoidable, it can help to have the whole raid run up into the small alcove where Thekal and his guards started before the encounter. The MT and melee fight Thekal against one wall while the OT, healers, and ranged DPS stand against the other. When he unleashes the AoE attack, the walls allow everyone to quickly recover and prevents the raid from being scattered about on the battlefield. Everyone's close proximity also allows for extremely quick disposal of tiger adds.

A variation on the above which we've found to work well is to AoE the three down from 10% in the small alcove in front of the cage, then tanking Thekal in the niche to the left facing the cage, and having the ranged in the cage. Ranged takes tigers, melee's behind Thekal, the tank doesn't go anywhere if there's a knockback, ranged can get out of LoS to bandage, and, if there's a random charge, an offtank in the cage's mouth can deal with it straight away.

Shirvallah, fill me with your RAGE!

Hakkar binds me no more! Peace at last!

Hakkar yells: Do not be lured into the mortals' trap. Bathe in my power! Be renewed and destroy the heretics!

In the Hearthstone expansion Rastakhan's Rumble, Thekal serves as the champion of Shirvallah's Tigers, a proud and righteous team of troll paladins, and appears as a legendary paladin card. His flavor text reads: ""…and then I beat him with 1 Health!""