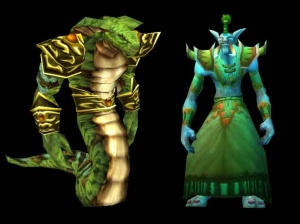 He is one of five High Priest encounters in Zul'Gurub, and is generally considered the second encounter of the instance.

Until defeated, Venoxis empowers Hakkar with

Aspect of Venoxis , allowing him to cast a poison bolt volley that deals stacking damage over time.

Venoxis engages the fight with four Razzashi Cobras, each with 15,260 health. These cannot be pulled prior to the encounter, but are susceptible to crowd control.

At 50% remaining health, High Priest Venoxis transforms into a snake, increasing his physical damage done by 75%, losing his phase one abilities and gaining new abilities.

At 25% health, Venoxis gains the ability to summon parasitic serpents.

The High Priest isn't too hard, despite his recent buff in 1.9.

While following either of these strategies, keep these notes in mind: