Ishanah is a draenei priestess located in the Shrine of Unending Light on Aldor Rise in Shattrath City. She is the leader of the Aldor faction and also represents draenei interests in Alliance political matters when Velen is unavailable.[1] 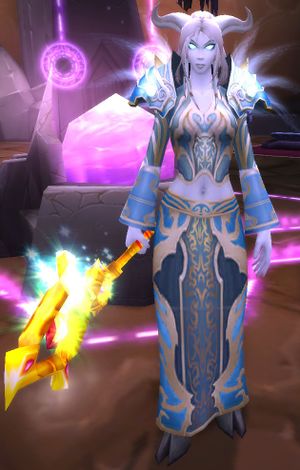 Ishanah in World of Warcraft.

Ishanah was approached by Maiev Shadowsong to gain the Aldor's aid against the armies of Illidan Stormrage. Ishanah was critical of the renegade warden and her motives, believing her mission was rooted more in a personal lust for vengeance than a true desire to see justice done; Ishanah decided that Maiev would receive no help from her people. Further, Ishanah unsettled the warden with the assertion that not everyone must enter the darkness to fight against it. Maiev left the Aldor Rise furious.[2]

She will give you one [Holy Dust] for each [Fel Armament] you turn in to her. At some point, she sent Exarch Orelis and a small group of anchorites to Netherstorm in order to investigate the activities of Kael'thas and his minions.[3]

She also briefly appears at Socrethar's Seat in Netherstorm during

[70G5] Deathblow to the Legion where she appeared telling Socrethar to take her instead of Kaylaan. However, Socrethar immediately killed her. After seeing this, Kaylaan the Lost resurrected her only for Socrethar to kill him. She then helped the Aldor forces to kill Socrethar. After the battle she tried to revive Kaylaan but was unable.

She took the place of the Prophet Velen to represent the draenei in the final vote to include Gilneas and the worgen into the Alliance.[4] 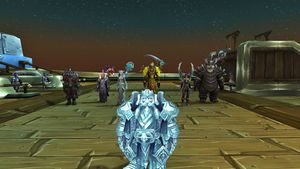 Ishanah with Magni and the other Alliance heroes.

Ishanah travels to Netherlight Temple after Saa'ra is returned to the Light and joins the Conclave there.

She participated in the Battle for the Exodar battling against High General Rakeesh, along with Calia Menethil.

She later serves as the innkeeper on the Vindicaar.

When Magni called upon the champions of the Armies of Legionfall to draw the corruption out of the Sword of Sargeras, Ishanah carried

[T'uure, Beacon of the Naaru] if the player was not a priest, representing the Conclave.[5]

After Archbishop Alonsus Faol brought Calia Menethil's dead body to Saa'ra, Ishanah told King Anduin that her body didn't decompose and that the naaru asked for him.[6] 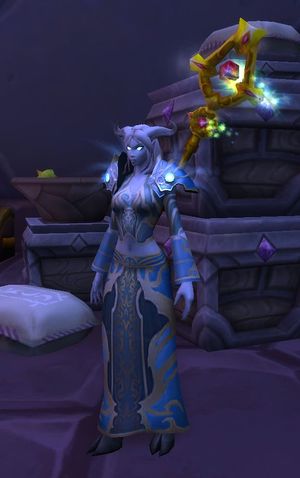 Welcome, <name>. We are the Aldor, priests of the Light and servants of the Sha'tar.

You are welcome to stay with us for as long as you need.

Who are the Sha'tar?

"Born from light" would be a close translation for Sha'tar. It is the name we gave to the naaru who reclaimed Shattrath City from the agents of Illidan.

Isn't Shattrath a draenei city? Why do you allow others here?

Shattrath is more than a staging ground for war against the Burning Legion and Illidan. It serves as a sanctuary to those seeking to escape the violence surrounding us.

We would be hypocrites if we turned the refugees away.

If your question refers to the Scryers, then I will respond that while I may not like them or their leader's wild claims of visions of redemption, it is not for us to question the wisdom of the naaru.

These are difficult times, <name>. We need allies where we can find them. 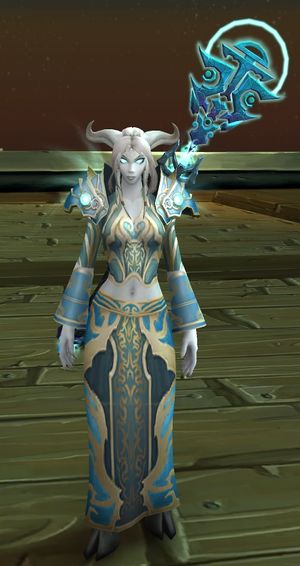 Ishanah wielding T'uure, Beacon of the Naaru on the Skyguard in Silithus.

Please, sit and make yourself comfortable.

<Ishanah looks at you quizzically.>

[Power Word: Shield] to heal herself. She can be feared and interrupted. Killing her does not yield reputation with the Scryers.