She is the second easiest boss in ZG (Venoxis is easier). After your raid gets the hang of it, she's rather easy, since she has no high burst damage, or mind control. Still, everybody should have Tier 0 or better equipment, else this fight is hard. Some practice is required in all cases.

She randomly charges people in the group, and summons 6-8 bloodseeker bats once per minute. 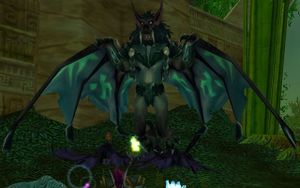 It's a good idea to pull her to the small hill (which is just to your right as you enter her area). If she's there, you get good advance warning before a bat wave comes in. You should have as few as possible people in melee range (ideally only the MT and OT), one sacrifice guy (e.g. a hunter) between her and the raid, and the raid at maximum casting range away from her. Everybody close to her will take AoE damage, so rogues will have to withdraw and bandage from time to time.

You will want to apply very high DPS in order to get her to 50% health as soon as possible. Your mages should save mana for AoEing the bat waves. They come once a minute, starting a minute after she is engaged in battle. It is important to kill these bats as quickly as possible or they will eventually swarm the raid.

If your mages' mana is very limited, it is possible to keep the mages out of the main combat; place them between the place where she initially stands and the raid, and let them kill the bat waves, and rest between waves. This tactic should not be used while learning the encounter, because it takes away DPS from her and adds complication. It's only advisable for experienced raids where the mages are played by alts or newbies.

She will at times charge the closest person in a 8–40ish yard range dealing AoE 1k damage and a 5 sec silence. Keep a hunter at a shorter distance to her than the rest of the main party, but off to the side and just toss a HoT on him after charges. She also has a fear ability if you cannot maintain control on her.

When her health gets below 50%, she shapeshifts and Phase 2 starts. This should happen before the fourth bat wave (within less than 4 minutes after the pull), else the raid doesn't put out enough DPS. Two bat waves is actually "normal", and one is possible if the raid has MC equipment.

At 50% she goes into caster form. Don't bother keeping her mana drained - you can interrupt/kick/pummel/counterspell her healing. Although you may receive an "immune" message, that is an immunity to silence effects, not the counterspell itself. Her heal does require mana, but we have seen her heal with only 125 mana. Having at least 1 person running a boss mod (e.g. CT_Raidassist) helps, as you'll get a warning message anytime she starts to cast a spell. If she manages to get off even a single heal, you'll most likely wipe as she heals for about 20-30%. (~50k hp)

[Mind Flay] in her human form that can wipe a raid if not counterspelled quickly. That means not only to keep an eye out and counterspell for her great heal, you must also be able to counterspell the chain mind flay.

She will eventually start to summon bats that drop bombs on your raid. These bombs hurt and will deal some significant DPS as long as you stay within the fire that results. You can avoid this by having the tank steadily move Jeklik around in a circle. This works because the bombs take 2 seconds to hit the ground after they're dropped, therefore not allowing the bats to aim. As long as the DPS continues, she will fall shortly after.

It is a good idea to have Paladins (if you have any) use Devotion aura until the bats with the bombs come, then the Paladins should change to Fire Resistance aura. Shamans should use FR totems in this phase.

Position the MT and melee on the left side of Jeklik's ledge, 30 yards from the wall (in the grass near that tree). The rest of the raid group will group together at max distance another 30 yards from where the MT is. It's best to choose a spot where you can see the MT (and Jeklik) and Jeklik's ledge (where the bats come from) in view at the same time. To start the fight, the MT should go up to the ledge, shoot Jeklik, and then run to the tanking spot. The boss will follow quickly and allow the MT to get his aggro/sunders in quickly. The group should have at least 3 people with a short cooldown interrupt (and a rotation for it), at least 4 AoE, and at least 4 healers. All warriors and rogues should save enough rage/energy to use their interrupt at any time (on heals or on mind flay).

The key to the first phase is getting out of the first phase as quickly as possible. When there are no bats, dps the boss hard. When bats do spawn, they need to be gathered tightly together, Frost Nova'ed, and then AoEd down quickly. To make this easier, we have used a triangle formation. 3 people are specifically placed in a triangle, with the tip facing the boss (8 or so toons apart). Healers line up along the back row and everyone else just has to know where that triangle is. When the bats come, EVERYONE who isn't meleeing the boss goes into the triangle to ensure that no bats wander away from the Frost Nova. It also helps to have an armored class (Plate/Mail) get the initial aggro. Once they are Frost Nova'ed, the AoE starts and people can then go back to their spots and the DPS. 1 spawn of bats is ideal, 2 is the goal, 3 is doable, anything more is probably a sign of the strategy not working or of needing more DPS.

At 50%, Jeklik will yell something and turn into a priest form and will not do much for about 10 seconds after this. Everyone should spread out (don't be within 5 yards of any other player) and use up any actions that require being stationary (evocation, FD & drink, rapid fire, etc). After that 10 seconds, Jeklik will periodically try to cast a greater heal (which must be interrupted immediately with kick, shield bash, Counter Spell, etc) and bats will throw fire bombs with increasing frequency. The MT needs to start moving her around in a small oval and the melee needs to be right on top of the MT, to avoid bombs. Everyone else should avoid the bombs and the fires as best as they can. In this phase, if you can stay out of the fires, prevent the greater heals, and maintain high dps, she will fall.

[Mind Flay] in her human form that can wipe a raid if not counterspelled quickly. That means not only to keep an eye out and counterspell for her great heal, you must also be able to counterspell the chain mind flay.

During Phase 1 of the fight more bats now come out of the cave during the waves in addition to each bat having slightly more life than before (approx. 6500 life). As noted above, a minimum of 4 AoE is necessary to take these out quickly enough to prevent them from targeting the rest of your raid. It is also a bit more difficult to hold the aggro on them after the patch. These bats have to be dealt with VERY quickly or they will wreak havoc on your raid.

As of patch 2.1.3, there appears to be an issue where, if your raid wipes after she summons the bat rider bombers, she may reset but the bat riders will not. This will make any wipe recovery preparations such as Soulstones useless. The bat riders don't appear to actually put anyone in combat, but they will bomb any live players all the way to the ramp leading from the lower part of the instance.

This bug has been seen when Divine Intervention was used on a shaman, whose totems were still up after the wipe. Jeklik was seen to be actively targeting a mana spring totem while standing at her reset point, without the green glow effect she normally has before a pull.

Phase 2
High Priestess Jeklik emits a deafening shriek!
I command you to rain fire down upon these invaders!