For lore and character history, see High Priestess Mar'li. For her encounter in Throne of Thunder, see Council of Elders. 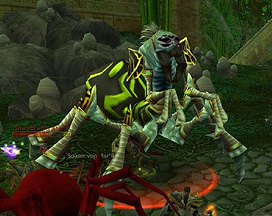 Mar'li is the High Priestess of the spider loa, Shadra.

She is one of five High Priest encounters in Zul'Gurub, and is generally considered the third encounter of the instance.

Until defeated, Mar'li empowers Hakkar with

Aspect of Mar'li , allowing him to occasionally stun his current target for 6 seconds. This effect also resets the target's threat.

Unlike the first two High Priest encounters, High Priest Mar'li's phases are timed and repeat, rather than permanently transitioning at a fixed health percentage. Mar'li engages with her speaker and immediately hatches four Spawn of Mar'li.

Mar'li will always begin the fight in Priest form and continues to cycle between her forms throughout the encounter. This phase lasts approximately one minute.

Mar'li transforms into a powerful spider, gaining a unique set of abilities while transformed. After approximately one minute she will revert to her Priest form.

For this fight, you need two tanks. To start the fight, have a priest

[Mind Control] the Speaker and make the Speaker attack Mar'li. At this point four spiders will spawn that need to be AoE'ed down right away. Once the spiders are down, and the Speaker gets pwned by Mar'li, the tank will pick up aggro and all ranged classes should cluster up outside of her AoE range. So set up like this:

Once the tank gets aggro, all melee apart from the OT begin attacking. Periodically, she will shapeshift into a spider form. When she does this, she'll web all the melee around her and wipe their aggro. She'll then charge the ranged group where the other tank will be waiting to pick up aggro and pull her back to the MT position. The OT is now the main tank, and the MT heads back to the ranged group to pick up the next charge. Be sure the ranged stay clustered up, otherwise it will be difficult for the tank to pick her up right away.

Periodically, a spider will spawn. If the spider is not immediately killed it will grow larger and more powerful and will wipe the raid. Just call it out and have your ranged deal with them right away, they drop quickly.

When in caster form, Mar'li will attempt to life drain someone. Be sure to immediately counter this with an interrupt ability such as

[Shield Bash]. It is sometimes hard to see if she is life draining or not, so pay attention. Do not let her heal herself; it is a significant amount. There is some debate about the usefulness of mana drain. Some claim that it will not prevent her from casting her life drain, but direct experience from others contradicts this. Mana drain does appear to be a useful tactic.

The OT should tank the Speaker, while the MT tank the boss. The OT take the speaker back to the main raid place. It's pretty fast killing, so the OT will have the time to get to his place and be ready to the Archnopoly. This way you don't need the MC, just two tanks.