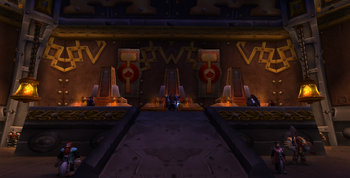 The High Seat of Ironforge

The High Seat serves as the throne room of the monarch of the city and kingdom of Ironforge. The chamber is located at the heart of the city, found just off the Great Forge and Commons areas. The throne room was used until recent times by King Magni Bronzebeard, Ironforge's monarch. However, since the Cataclysm and Magni's petrification, the throne of the kingdom has remained vacant. During this period, a provisional body known as the Council of Three Hammers was established to rule the dwarves, and continued to occupy the High Seat.

The High Seat currently hosts three thrones (one for each of the clans forming the Council) belonging to Moira Thaurissan, Muradin Bronzebeard, and Falstad Wildhammer. Several other important figures also reside here, such as Senator Barin Redstone and Royal Historian Archesonus. 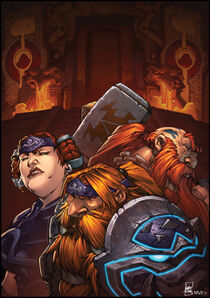 The Council of Three Hammers before the High Seat