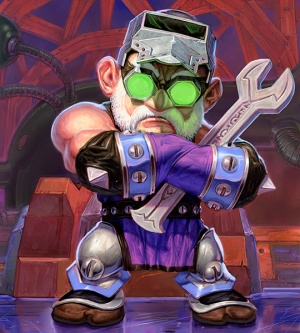 High Tinker is a title granted to the elected leader of the gnomes, chosen by common consent, based on the merits of their work.[1] Despite this, it does not hold any legal authority to compel gnomes to listen to the High Tinker; meaning it serves as a figurehead and representative chosen to speak for the gnomes by virtue of respect.[2] After the departure of King Mechagon[3] four hundred years ago,[4] gnomes moved away from monarchy, choosing instead to elect one of their own to the office of High Tinker.[1]

The current High Tinker is Gelbin Mekkatorque, who has held the office for several decades. After the irradiation of Gnomeregan, Mekkatorque led his people from Tinker Town in Ironforge, until he led Alliance forces in reclaiming the surface of Gnomeregan. From there, the High Tinker continued to lead his people from the surface of Gnomeregan in New Tinkertown, working on steadily reclaiming the subterranean capital. Following the reunion of the gnomish and Mechagonian people, Mekkatorque was declared formally as King of the gnomes, taking the place of King Mechagon as a true monarch over the gnomes; though he continues to also hold the title of High Tinker in tandem with his monarchical status.

While it is unknown how long each term lasts, it appears that one can be elected an unlimited amount of times. Gelbin Mekkatorque, current High Tinker of the gnomes, who was described as having taken the position at a young age,[1] has held the office for several decades; having already been leading the gnomes during the splintering of the Alliance of Lordaeron prior to the Third War.[5] While it is unknown how long a gnome lives exactly, Gelbin holds the appearance of an elderly gnome through his art and in-game depictions. Gelbin is noted to have held the position for a long time due to the faith that his people have in him; though such pressures occasionally led him to question whether or not he should resign to allow another High Tinker to be elected.[1]

When Gelbin was elected High Tinker of Gnomeregan, Sicco Thermaplugg was infuriated because he thought he should have the position instead, but he kept his feelings secret.[6] Sicco ultimately betrayed Gelbin and the gnomes in time of need during the Trogg invasion, intending to blame the irradiation of Gnomeregan on Mekkatorque; though it did not go as expected.[1]

The High Tinker is the highest political office in Gnomeregan, and of Gnomeregan. These men and women hold grand titles (for example "King of the Gnomes") but only hold their power for set terms of office, after which they return to the workforce. The ruler holds the seat of the High Tinker.[7]

Mekkatorque's former chief advisor, Sicco Thermaplugg, planned on not only becoming "High Tinker" but also being the first true "King of Gnomeregan" in over four hundred years. He currently controls the halls and leper gnomes of the irradiated city.[8]