High Warlord Cromush is a Mag'har orc high warlord, who attended the meeting where Sylvanas Windrunner showed Garrosh Hellscream how the val'kyr raise the dead into new Forsaken. Both the High Warlord and the Warchief himself were disgusted by this, and to make sure the forsaken won't be up to any tricks, Garrosh dispensed Cromush to "guard" Sylvanas. Cromush takes this charge without question, though appears to be far more tolerant of the Forsaken than some other orcs in the Eastern Kingdoms.

After a long hiatus, Cromush returned to aid the Horde war effort during the Fourth War. 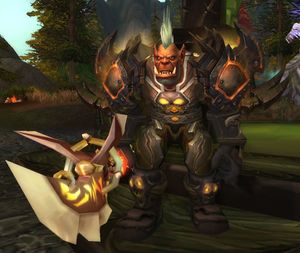 High Warlord Cromush accompanied Lady Sylvanas and her forces through Silverpine Forest - Sepulcher and The Forsaken Front. From the latter he directed the adventurers to kill worgen druids. Following the victory over the Alliance, he fought against Lord Godfrey and his allies when they betrayed Sylvanas, making Godfrey and his ilk escape to the nearby Shadowfang Keep. In a moment of panic, Cromush hastily urged the val'kyr to "fix" Sylvanas, which they did, even though it cost them their lives in the process.[1]

Deathstalker Commander Belmont later finds Cromush within Shadowfang Keep, and together with the player they work to defeat Godfrey. Belmont smoothly attributes the effectiveness of the plague the Forsaken forces had been using to clear the keep as little more than a worgen repellent; an excuse Cromush takes with a pinch of salt. Godfrey is later able to incapacitate Cromush via poison, leaving Belmont and the player to continue ahead and take revenge.

Cromush was later relocated to Tarren Mill in Hillsbrad Foothills, eager to put the Forsaken war machine to good use. After the demise of Kingslayer Orkus, Cromush honors his actions for the betterment of a Horde-controlled Lordaeron, and learns of the Stormpike Clan's intentions towards it. He asks for the aid of the Frostwolf Clan in retaliation, and is shocked when General Drek'Thar completely rejects the notion of aiding the Forsaken.

Outraged, Cromush resolves to defeat the Stormpike without the assistance of the Frostwolves. With the help of the player and the Banshee Melisara, Cromush goes about bringing the destruction of the Stormpike Clan in Hillsbrad, and is able to bring about an aptly named "Stormpike apocalypse", shattering their presence in Hillsbrad.

Cromush reveals that Warchief Hellscream will learn of Drek'Thar's supposed "treason", though nothing ever came of it.

Cromush accepts the call to arms sent out by the Guardians of Hyjal, and comes to their aid in the battle against Ragnaros' forces.[2]

During the Legion Invasions of Hillsbrad, Cromush led the defense against the demons. After they were repelled he wanted to deal with the Alliance.

Cromush is aboard The Banshee's Wail in Zuldazar. As part of the Horde War Campaign, he assisted the Horde with establishing an outpost Stormsong Valley on Kul Tiras.

Main article: Heroes of the Horde!#Notes

Main article: Romp in the Swamp#Notes

It's likely that the Alliance will fall victim to the blood trolls, but I want to ensure their demise. Cut them down wherever you find them!