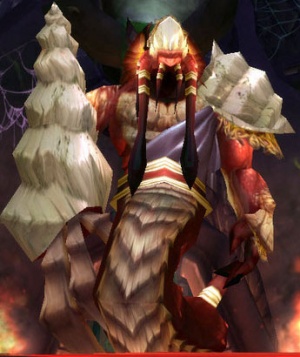 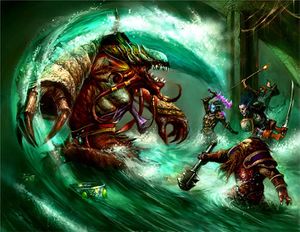 As seen in the TCG (and UVG) on the card "Tidal Burst". 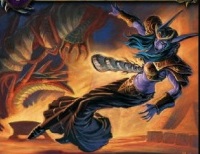 As seen in the TCG on the card "Needle Spine".

High Warlord Naj'entus is an enormous naga lord and the first boss encountered in the Black Temple.

Few naga matched the strength of Naj'entus. He was a champion of Lady Vashj[3] and servant Illidan Stormrage,[4] and was entrusted the protection of the Black Temple by the Lady. His superior abilities allowed him to surround himself with deadly cold, and his spines and needles could inflict horrific wounds. He was killed during the assault on the Temple by Akama, Maiev Shadowsong and a group of adventurers.[1]

The fight is a gear check, requiring high stamina on the whole raid and well-equipped healers.

High Warlord Naj'entus periodically skewers players with his Impaling Spines, stunning them until freed by allies. Over the course of the encounter, Naj'entus casts Tidal Shield, becoming immune to damage and restoring health over time until a player hurls a Spine back at him to pierce the bubble.

There is a pair of Aqueous Lords before this boss. They pull together (but separately from the boss) and are not part of the encounter.

All raid members take 8,500 frost damage every 60 seconds, making 8,501 HP buffed the absolute minimum requirement, but in practice 10,000 HP buffed are needed, to give the healers a little slack.

Classes that are likely candidates for combat rezzes (all Shamans and all healers) should have at least 8500 HP unbuffed. Frost resistance gear and [Major Frost Protection Potions] are not a reliable means to increase survivability. Everybody should have health potions and healthstones, and don't hesitate to use them.

After a standard pull, the melee group sets up close to the boss, and all ranged classes distribute over a large area, with each raid member 6 yards apart from everyone else to avoid the frost AoE from Needle Spine. The melee group should split in 2-3 subgroups to minimize AoE damage.

Rogues need to keep a full stack of

Every 20 seconds, Naj'entus shoots a large coral cone at a random raid member. The spine paralyzes and damages its target until it is removed by another player by looting the target. This needs to be done very quickly. It is possible to carry up to five spines in the inventory.

Looted spines disappear when releasing (after a death) or when the encounter is reset.

Spines have a maximum range of 25 yards.

Since the shield deals 8500 frost damage to the entire raid, everybody must be at top health before the spine is thrown. Most Boss Mod type UI enhancements have an indicator window showing people with less than 8500 health when the shield is up.

Dealing with the Impaling Spines and the Tidal Shield requires good synchronisation. It's a common practise to have one player announce the Impaling Spine targets, and to call for the throwing of a spine when the whole raid is healed. It's a good idea to have one of the raid healers do the calling for the spine throw (because he can call for the spine when the last heal is nearly finished).

In some situations it may be necessary to sacrifice a few raid members because Naj'entus heals himself, so waiting a long time for the raid to heal up is not a good option.

This is a quick method to throw a spine from the inventory:

It's also a good idea to announce the facts of being hit by and having looted a spine:

Aggro
You will die in the name of Lady Vashj!

Death
Lord Illidan will... crush you!
You hear a loud rumble of metal grinding on stone...