Not to be confused with Urban Planner Volrath. 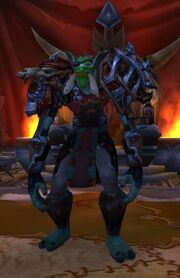 Volrath on the Seething Shore.

He later captained a Horde gunship during the battle for Seething Shore.

He also appears in the War Headguarters in the Mugambala in Zuldazar.

Later, he appeared in Newhome in Nazjatar.

Pissed
Hey - I don’t come to your garrison and poke you now do I? No, I don’t!

Approaching the Keep
De Alliance be at de gates! To Arms soldiers of de Horde!

Death
I have failed my Horde, my tribe, my chieftain...

Tremblade thinks she can outsmart us with her band of Alliance fools.

Her arrogance will be her downfall.

Da Alliance are all over in Nazjatar. You can help us take 'em out.