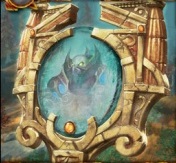 The Highborne Soul Mirror is a rare archaeology artifact that requires 150 skill to find and 100 Night Elf Archaeology Fragments to solve. Up to three 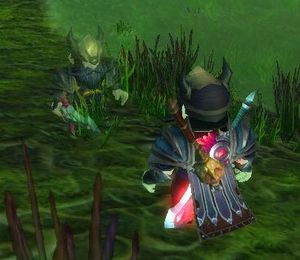 When activated, a ghostly mirror image of the character will step out from the character and turn around to face him or her for 20 seconds. This image appears identical to that of the user, though is partially transparent, similar to ghost models or a priest using the

[Fade] spell. This image will not move from its spot, but will continually turn to remain facing the character until it eventually slowly disappears. 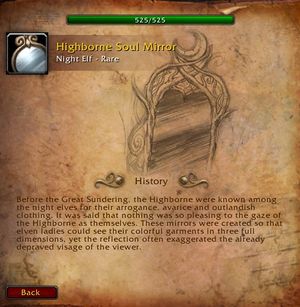 While the glass has been shattered into a thousand fragments, the detailed work of the mirror's frame itself convinces you that this artifact was once highly magical, and might still be if every piece could be recovered. It is a large mirror, like a lady might have mounted in her dressing room.

Before the Great Sundering, the Highborne were known among the night elves for their arrogance, avarice and outlandish clothing. It was said that nothing was so pleasing to the gaze of the Highborne as themselves. These mirrors were created so that elven ladies could see their colorful garments in three full dimensions, yet the reflection often exaggerated the already depraved visage of the viewer.