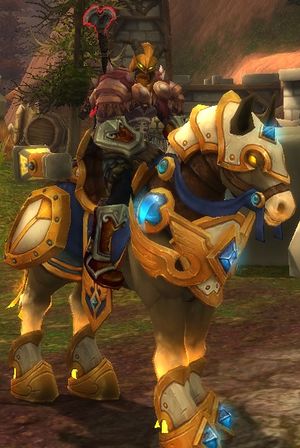 Highlord's Golden Charger is a mount obtained by paladins.

This mount is a quest reward from

The fanciest of all of the horses.

It starts when Grayson Shadowbreaker decides to find a new mount for the Highlord. Having already helped Alliance paladins gain their charger, he now has all the material needed. After gaining a

[Stonehide Leather Barding] and strengthening it from Alard Schmied, he prepares an expedition to Stratholme.

Defender Sterius awaits at the Eastwall Gate, ready to escort the Highlord inside. Grayson awaits inside Alonsus Chapel, with six Silver Highguards. Before the arrival of the Highlord, Grayson sent in three paladins to secure some

[Stratholme Holy Water] in order to purify the Barding. However, they have not returned. The Highlord in instructed to recruit two paladins from outside and venture into the city to finish the job.

Inside the city, the Highlord encounters an unknown figure trying to hinder his progress. The unknown figure raises three undead abominations and slowly tortures the three missing paladins. After destroy the monsters, saving the paladins, and find the holy water, the Highlord returns to Grayson.

Once the barding have been imbued, Grayson rides out to the Slaughter House. Unfortunately, the shadowy figure stole the body and took Rivendare's mount for his own. Making himself known as Raemien the Soultaker, he confronts the paladins with countless undead outside.

Raemien is killed and Shadowmane is contained by Grayson and his paladins. They bring it to Light's Hope Chapel where they purify it and the Highlord accepts it as his own.