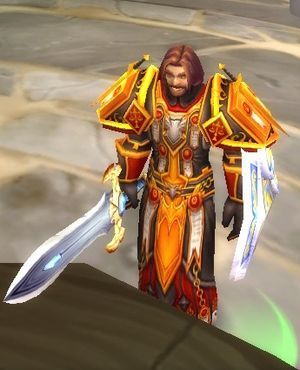 Highlord Leoric Von Zeldig is a human paladin of the 7th Legion and the Might of Kalimdor.

He was a member of the Might of Kalimdor - the army raised by both the Horde and the Alliance in opposition to the growing threat from Ahn'Qiraj. He was present in Cenarion Hold in Silithus when the Scarab Gong was rang by the wielder of

Von Zeldig later traveled to Wintergarde Keep in Northrend along with the rest of the 7th Legion to do battle against the Scourge.

Upon the death of Tirion Fordring, he joined the Silver Hand. He is currently located in the Sanctum of Light to fight the Burning Legion.

Highlord Leoric Von Zeldig: The mine is lost. All of our defenders have perished and the miners resurrected as Scourge aberrations!
Siege Engineer Quarterflash: It does get worse, old friend. According to my calculations, without suitable materials to repair our parapets, the walls protecting this keep will crumble in twelve hours.
Highlord Leoric Von Zeldig: Grim news, my pint-sized companion. Should we suffer a defeat here the ramifications will be felt across this frozen wasteland. Highlord Fordragon and our armies at the Wrathgate will be defenseless against an assault from Naxxramas.
Siege Engineer Quarterflash: We have been through worse and survived, Leoric. Do not forget Hyjal...
Highlord Leoric Von Zeldig: Yes, yes, I haven't forgotten Hyjal, or Silithus, or the march of the Legion, or every other damnable confrontation the 7th Legion has faced. It... I don't want the soldiers to hear this, Two-bit, but for the first time in my life...
Siege Engineer Quarterflash: Say no more, Leoric. We all feel the chill in our bones. Yet, each day, heroes arrive from across the world - and beyond.
Siege Engineer Quarterflash: I have heard whisperings from the east that our esteemed Scarab Lord has joined the battle, as have entire battalions from Shattrath: heroes blessed by A'dal himself, granted rank as Hand of A'dal!
Highlord Leoric Von Zeldig: You are right, of course, old friend. Let us hope that these heroes arrive soon.