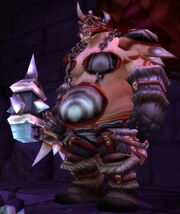 Omokk in World of Warcraft.

Highlord Omokk is an ogre mini-boss found in Lower Blackrock Spire. Though he appears to be the leader of the Spirestone clan, he is actually a proxy for the true leader, Urok Doomhowl.

Omokk rules over the spire's ogres with an iron fist. Many underlings have challenged him to single combat in the hopes of seizing the highlord's title, but all have fallen without landing a solitary blow. This mysterious phenomenon has led to rumors that dark magic is protecting Omokk.

Tank Omokk against a wall to negate the knockback. Apart from that Omokk is an easy tank n' spank encounter.