“Few places in Azeroth are as beautiful — or as perilous — as Highmountain. Its rugged slopes teem with wild beasts, roaring waterfalls, and breathtaking views. A vast network of caverns winds through the mountain's heart, holding legendary treasures and secrets from Azeroth's distant past.”

Highmountain is a region that dominates the northern horizon of the Broken Isles with its jagged peaks. It is one of the last great frontiers of the isles,[1] named in honor of Huln Highmountain for his bravery in the War of the Ancients.[2]

Long ago, the Old Gods sought to claim Highmountain. Their campaign was led by Uul'gyneth. Huln Highmountain gathered heroes from among the tribes, and fought against Uul'gyneth's servants, the Necrodark. Yet the forces of shadow were too great to overcome. So Huln devised another plan. Wards were placed to lock away the Old Gods' influence. Though the general survived, Uul'gyneth's essence was trapped.[3]

Following the war in Draenor, the Burning Legion began to invade Azeroth through the Tomb of Sargeras. The tauren of Highmountain, descended from Huln Highmountain and other tauren who had fought in the War of the Ancients,[4] had been living in peace with the local drogbar for generations, but when the Legion invaded, the drogbar stole the tauren's sacred artifact, the

[Hammer of Khaz'goroth]. The Highmountain are now at risk of being taken over by the drogbar and their king Dargrul the Underking, ruling his kin from the former lair of the black aspect Neltharion.

As is his habit when new parts of the world are ready to be discovered, the one and only Hemet Nesingwary makes his way to the mountains of the Broken Isles in search of new and exotic dangerous animals to hunt.

The wards bounding Uul'gyneth began to weaken just enough for the Darkness to seep through, and the Necrodark began to summon Uul'gyneth into the physical realm.[3] Though Uul'gyneth did manage to incarnate itself, it was defeated by a Horde adventurer.[5]

The namesake mountain of this region, Highmountain Peak, is among the tallest mountains in all of Azeroth, and the Highmountain range which surrounds it is filled with untamed wilds, deep canyons, fertile valleys, and icy peaks.[4] Because the waters of Highmountain flow into Suramar, Stormheim, and Val'sharah, the area serves as the lifeblood of virtually every region on the Broken Isles. Below the surface of the region lies an infinite network of tunnels and caverns, with steam and warmth implying potential volcanic activity.[6] 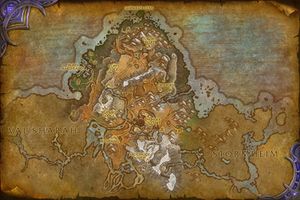 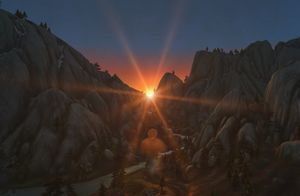 A sunset over Highmountain, seen from Thunder Totem.

Flight Paths from The Witchwood 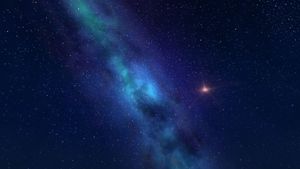 The night sky over Highmountain.