From Wowpedia
(Redirected from Highmountain Tauren)
Jump to: navigation, search 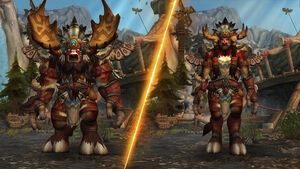 The Highmountain tauren are an offshoot of tauren found in the region of Highmountain on the Broken Isles. Divided into four tribes (Highmountain, Rivermane, Skyhorn and Bloodtotem), they are the direct descendants of the tauren led by Huln Highmountain who assisted the Kaldorei Resistance during the War of the Ancients.[1] During the war, Huln received a blessing from Cenarius, so that his people would forever have the demigod's favor, granting them the Horns of Eche'ro: moose-like antlers.[2]

During the third invasion of the Burning Legion, the drogbar, who had previously lived in peace with the Highmountain, rose up and stole the sacred

[Hammer of Khaz'goroth], shattering the unity of the four tribes. The tauren found aid from adventurers from outside Highmountain, who defeated the drogbar and recovered the Hammer. Not long afterward, the Highmountain tauren joined their kin from Kalimdor as members of the Horde. 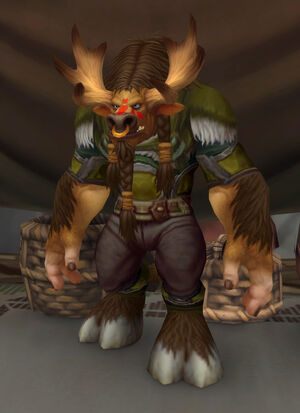 The peaks and valleys of Highmountain have been home to four ancient tauren tribes for millennia: Rivermane, Skyhorn, Bloodtotem, and Highmountain.[1] For generations, the tribes fought each other upon the mountain. Countless lives and even entire tribes were lost in the bloodshed, until one day, Huln of the Highmountain tribe found his people slaughtered by an unfamiliar foe. Though battling with grief, he managed to convince the warring tribes to unite under his own banner to face this new threat: the Burning Legion.[3]

Joining with the Kaldorei Resistance alongside the furbolgs and earthen, Huln and his tauren played a crucial role in several battles during the War of the Ancients. For his bravery and his rescue of the moose Eche'ro, Huln and his people received a blessing from the Wild God Cenarius, so that they would always have the demigod's favor: the Horns of Eche'ro.[2] After the war, Huln returned home. With the aid of a powerful artifact known as the

[Hammer of Khaz'goroth], he banished the black dragon Deathwing from the region and liberated the dragon's drogbar slaves. In Huln's honor, the four tribes renamed their homeland "Highmountain".[4] 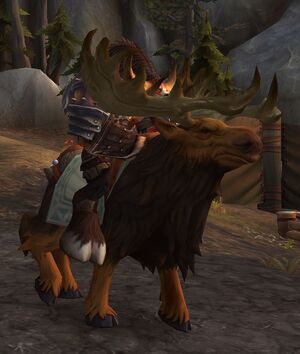 A tauren riding a moose.

For centuries, the Highmountain tauren tribes protected the Hammer of Khaz'goroth and lived in peace alongside the drogbar. However, soon after the Burning Legion's arrival on the isles, a drogbar leader by the name of Dargrul rose up and shattered their unity by stealing the hammer and killing High Chieftain Ulan, intending to use the artifact's immense power to take control of the region.[5] In response, Mayla Highmountain, daughter of Ulan and his heir, enlisted the aid of adventurers in order to stop Dargrul and reunite the scattered tribes. Despite their efforts, the Bloodtotem tribe betrayed their brethren by joining the Burning Legion. In their place, the drogbar Navarrogg and his Stonedark tribe joined the Highmountain's cause instead.[6]

After corresponding with Chieftain Baine Bloodhoof in the aftermath of the Argus Campaign, Mayla Highmountain accepted an invitation to attend a feast in Thunder Bluff. This was the first time that the Highmountain tauren had visited Kalimdor. Yet when Baine and the Horde champion greeted their Highmountain tauren guests, Spiritwalker Ebonhorn was tormented by the Old Gods' forces of Uul'gyneth attempting to corrupt him,[7] and he and Mayla were forced to retreat back to Thunder Totem while Baine and the Horde champion defended Thunder Bluff from Uul'gyneth's invasion force.[8][9] Apparently, the wards Ebonhorn had been maintaining in Highmountain weakened just enough to let the Darkness seep through.[10]

Later on, Baine and the Horde champion traveled to Thunder Totem to offer their aid to mend Ebonhorn,[11] who has been fighting unconsciously to keep a darkness from consuming him. Mayla sent the Horde champion to Spiritwalker Graysky,[12] who has the Horde champion undergo Spiritwalker rituals to walk in the memories of Igrul the Scalebane,[13] Oenia Skyhorn,[14] and Huln Highmountain in order to restore the wards that kept the dark corrupting forces at bay.[15] After restoring the wards, Ebonhorn regained consciousness[16] and revealed Uul'gyneth sought to return and conquer Highmountain. Baine, Mayla, the Horde champion, and Ebonhorn left to join Lasan Skyhorn, Aviash, and Jale Rivermane at Highmountain Summit to thwart the Necrodark's ritual to incarnate Uul'gyneth[10] and restore the final ward. They failed however, and Uul'gyneth was summoned into the physical realm,[17] leaving the Horde champion little choice but to vanquish Uul'gyneth the Darkness. After the battle, Mayla expressed her gratitude for rescuing her people from the Old Gods.[18] Impressed by the strength and courage of the Horde, Mayla and Baine traveled to Orgrimmar to pledge the Highmountain tauren to the Horde.[19]

The Highmountain tauren appear largely similar to their Kalimdor cousins, with the main difference being their prominent antler-like Horns of Eche'ro,[2] rather than the more bovine-looking horns seen on yaungol, tauren and taunka. Both males and females have these antlers, though the ones seen on females are much smaller. The Highmountain tauren inscribe and decorate their antlers to show their particular tribe affiliation or even their rank within that tribe.[1]

Not all Highmountain tauren are hunters, but those that are typically commemorate their first kill with a ceremonial drum, stretched with the hide of their quarry. Most trailhead drums are made with rabbithide or foxhide. Hunters typically carry them for the rest of their lives.[26]

It is customary for a widow, child, or grandchild to keep a pyrestone from the funeral pyre of an especially loved one. These stones are carried in a pocket and rubbed for courage, comfort, or in rememberance of a lost companionship.[27]

The Highmountain tauren frequently use the large and powerful moose of Highmountain as mounts or cook their meat as food.[29] Highmountain elderhorns are the favored mount of Highmountain hunters, able to leap across the rushing rivers of Pinerock Basin even when saddled with a full-sized tauren.[30] The tauren train the sure-footed Highmountain thunderhoof moose to safely traverse the paths and peaks of Highmountain.[31] At one point, moosebone was the most common material for fishhooks: solid enough to carve a barb into, but pliable enough not to break off in the mouth of a large salmon. Many tauren fishermen carved elaborate designs into their "lucky hooks".[32] The Highmountain tribes cherish the hide of a rare and elusive creature, the Majestic Elderhorn, for their most important ceremonies.[33]

The enormous Great Eagles of Highmountain are revered by the Skyhorn tribe,[34] who use them as mounts in much the same way as the Frostborn dwarves of the Storm Peaks. 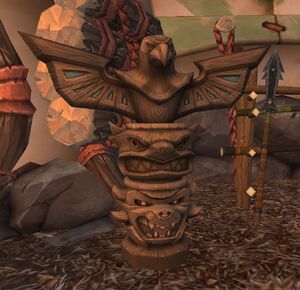 Additionally the Prepfoot are a recently-formed group who believe that Deathwing has not been defeated and will soon return to Highmountain and cause the ocean to swallow the entire region. Their founder and leader is Trand Prepfoot, and they are found exclusively in the Prepfoot Compound.