The Highmountain are descendants of the hero Huln Highmountain, also known as "Huln of the Eagle Spear" and the members of the tribes he united. During the War of the Ancients, 10,000 years ago, he united the warring Rivermane, Bloodtotem, and Skyhorn tribes of his homeland under the banner of the Highmountain.[1] Huln was chosen by Krasus to lead his people against the Burning Legion alongside Unng Ak of the furbolgs and Dungard Ironcutter of the earthen. For his bravery during the war, Huln received a blessing from the Wild God Cenarius, so that his people would forever have the demigod's favor: the Horns of Eche'ro, which transformed the horns of Huln[2] and his followers[citation needed]  into moose-like antlers. After the war, Huln returned to his homeland and used a titan artifact known as the

[Hammer of Khaz'goroth] to banish the traitorous Dragon Aspect Deathwing and free his drogbar slaves as well as a single uncorrupted black dragon egg. In his honor, the four tribes named the region "Highmountain".[3] 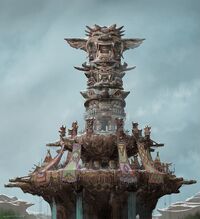 When the night elves who founded the Unseen Path left Mount Hyjal to return to the Broken Isles, the Highmountain tauren recognized the nobility of their cause and offered them friendship. It was the descendants of Huln Highmountain who led the Unseen Path to Talon Peak where they built their base known as Trueshot Lodge. Since the Burning Legion's return, the Highmountain have helped restore the lodge, such as replacing two damaged watch towers with tauren structures.[4]

Millennia later, Huln's descendants continue to live in Thunder Totem on the Broken Isles. With the death of High Chieftain Ulan, his daughter Mayla has become the High Chieftain of the accord between Highmountain, Rivermane, Skyhorn and Bloodtotem. Unfortunately, the theft of the Hammer of Khaz'goroth by Dargrul the Underking and his drogbar has shattered the unity of the four tribes. Despite the attempts at a reunion of the tribes by an adventurer, the Bloodtotem betrayed the other tribes by joining the Burning Legion. In their place, the drogbar Navarrogg and his Stonedark tribe joined the Highmountain's cause instead.[5]

After corresponding with Chieftain Baine Bloodhoof in the aftermath of the Argus Campaign, Mayla Highmountain accepted an invitation to attend a feast in Thunder Bluff. Yet, when Baine and the Horde champion greeted their Highmountain tauren guests, Spiritwalker Ebonhorn was tormented by the Old Gods' forces of Uul'gyneth attempting to corrupt him,[6] and he and Mayla were forced to retreat back to Thunder Totem while Baine and the Horde champion defended Thunder Bluff from Uul'gyneth's invasion force.[7][8] Apparently, the wards Ebonhorn had been maintaining in Highmountain weakened just enough to let the Darkness seep through.[9]

Later on, Baine and the Horde champion traveled to Thunder Totem to offer their aid to mend Ebonhorn,[10] who has been fighting unconsciously to keep a darkness from consuming him. Mayla sent the Horde champion to Spiritwalker Graysky,[11] who has the Horde champion undergo Spiritwalker rituals to walk in the memories of Igrul the Scalebane,[12] Oenia Skyhorn,[13] and Huln Highmountain in order to restore the wards that kept the dark corrupting forces at bay.[14] After restoring the wards, Ebonhorn regained consciousness[15] and revealed Uul'gyneth sought to return and conquer Highmountain. Baine, Mayla, the Horde champion, and Ebonhorn left to join Lasan Skyhorn, Aviash, and Jale Rivermane at Highmountain Summit to thwart the Necrodark's ritual to incarnate Uul'gyneth[9] and restore the final ward. They failed however, and Uul'gyneth was summoned into the physical realm,[16] leaving the Horde champion little choice but to vanquish Uul'gyneth the Darkness. After the battle, Mayla expressed her gratitude for rescuing her people from the Old Gods.[17] Impressed by the strength and courage of the Horde, Mayla and Baine traveled to Orgrimmar to pledge the Highmountain tauren to the Horde.[18]

Members of the Highmountain tribe took part in the Fourth War. Notably, they set up an outpost named Swiftwind Post in Drustvar on Kul Tiras.

The Highmountain Tribe has dwindled in numbers over the years, and with the drogbar threat looming, seek new allies to save their homeland.

The other Highmountain tribes and the Stonedark tribe of the drogbar are a part of the Highmountain Tribe as well.