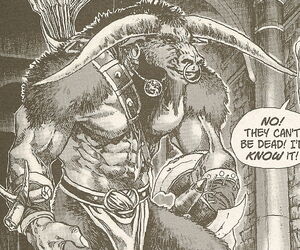 Trag before he died.

A tauren hero by the name Huln Highmountain acted as the spokesperson for the tauren tribes during the War of the Ancients after having united the warring tribes of his homeland, but it is unclear if Huln's Highmountain Tribe is the same as this Highmountain tribe.

Trag Highmountain was a tauren of the tribe. He left his fellows and joined the barony of Mordis. During a battle he died,[2] but was raised as a Forsaken due to the powers of the Orb of Ner'zhul.[1]

Betrayal of their undead tribesman

Trag returned with his tribe, but the shaman, Sulamm betrayed him and ordered Ornamm to kill Trag whilst he slept with a spell. Trag was burning when he awakened but managed to defeat the Tauren party led by Ornamm. However, he didn't kill anyone but proceded to confront the shaman. Even though his own rage and the Lich King's whispers ordered Trag to kill Sulamm he couldn't, leaving him in trance because of his own spell. Trag left his tribe because of what they tried to do and because he could put them in danger.[1]

Where exactly Trag found the tribe is unclear, but an ancient burial land of the tauren and the Henge of the Earth Mother were nearby. As it is said that after the betrayal, Trag trekked into the mountains of Durotar and the area was depicted with mountains and forests, the tribe could be located in Mulgore, the Barrens or Feralas.